Pork and beans usually means hot dogs and baked beans, but you don’t need to be unhealthy to have the classic western meal. Add some super foods and you’ve got a classic dish that’s not only good but good for you, too. 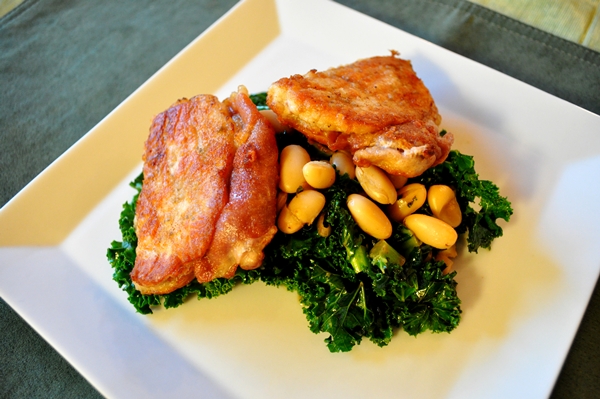 There’s a new show over on ABC called The Chew. I’m sure you’ve seen the ads: It’s the newest daily talk show, but instead of having a ton of guests you either have or haven’t heard of, this show has five chefs who get together and talk food. Of course I was in from the moment I saw the first advertisement. It wasn’t just because the show was going to be all about food. I mean, there are plenty of shows and even a few networks that are devoted to cooking and food. It was because it took five well known chefs and paired them together with all their different styles. So unlike other food shows where you get one or two recipes over the course of the broadcast, here you were going to get five recipes and they were all going to be completely different because they were coming from five different chefs who all have different styles.

Anyway, the first episode aired and I knew I’d made the right decision by setting my DVR. There were two recipes I wanted to make right off the bat. This pork and beans recipe from Michael Symon was such a novel way to make pork cutlets and he made it look so easy that I knew I had to give it a try. It was just as simple as he said it was. And since he was using pork cutlets, white kidney beans and kale, I knew it was not only going to be healthier than your typical pork and beans, it would fit perfectly into my October Unprocessed challenge as well. So if you love pork and beans but aren’t really excited about those processed hot dogs or barbecued baked beans, go the unprocessed route and give this version a try. You won’t be disappointed.

Other bean recipes from SheKnows