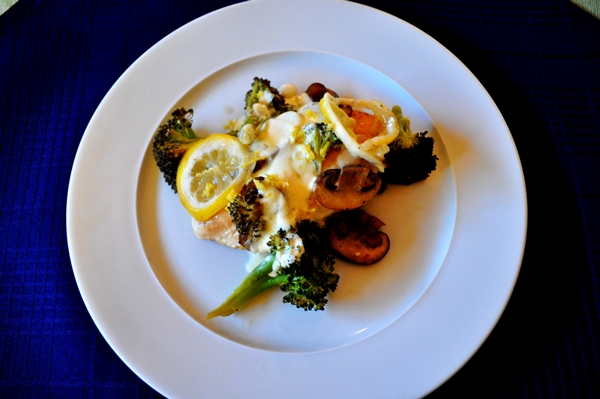 I’m a big believer in making my own pasta sauces. As a matter of fact, it’s only when I have no time that I grab a bottle of sauce at the grocery store and pour it over pasta. But there’s one kind of sauce I’ve never created — Alfredo. I don’t know why. Maybe it’s because the idea of a cream and cheese sauce scares me. Maybe it’s because the few times I’ve tried, the cheese didn’t melt properly and turned into a gloppy mess. Whatever the reason, I’ve stayed away.

But this chicken recipe from Better Homes and Gardens made me want to give Alfredo sauce another go. And guess what? It turned out great! I don’t know what I did differently. Maybe it was the freshly shredded Parmesan. Maybe it was that the butter and flour finally combined for a perfectly smooth paste. Who knows? The point is this recipe worked! And with the lemon juice and freshly grated garlic, this Alfredo sauce was so yummy, I want to make it again. But next time I won’t pour it over chicken. Next time it’s going over pasta.