A few fresh vegetables from the farmers market can take chili from standard to deliciously healthy in no time. 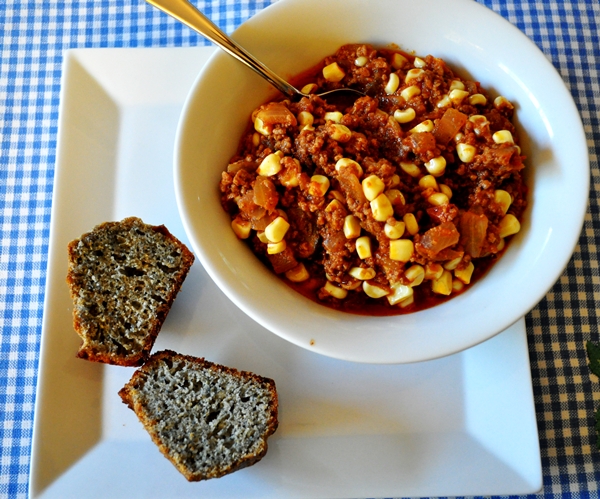 This month I’m participating in something called October Unprocessed. It’s a pledge that for the month of October I’m going to try and only eat food that is unprocessed. That means nothing with ingredients I don’t recognize or can’t pronounce, like niacin or disodium guanylate — pretty much anything I can’t recreate in my own kitchen. At first I was concerned it was going to be hard, but as long as I plan what I’m making (which I do anyway), it’s actually not too difficult and my meals are so much healthier. This week, for instance, I decided to make a nice hearty corn chili since it’s been so cold and rainy here.

Now I usually used canned kidney beans and canned tomatoes. I was shocked to discover some of the stuff that’s in a simple can of tomatoes. All those preservatives just so it can stay on the shelf an extra couple months can’t be good for you. Since both corn and heirloom tomatoes are at the height of their season right now, I decided to forgo the canned veggies and buy fresh. What a difference they made! The corn was sweet and crisp and those hearty heirloom tomatoes added a richness I wasn’t used to. The good news? It didn’t take any more effort to make this healthier chili than it did to make my canned veggie version. So if you’re in the mood to try something a little different, try going unprocessed this week. If you’re even more adventurous, try for the whole month. You’ll be amazed at the difference in flavor and health. I may never go back.