Anyone can make stuffing and put it inside a chicken or turkey. But sprinkle the bread crumbs and vegetables over a few chicken breasts and you’ve got a rich one pot dinner in no time. 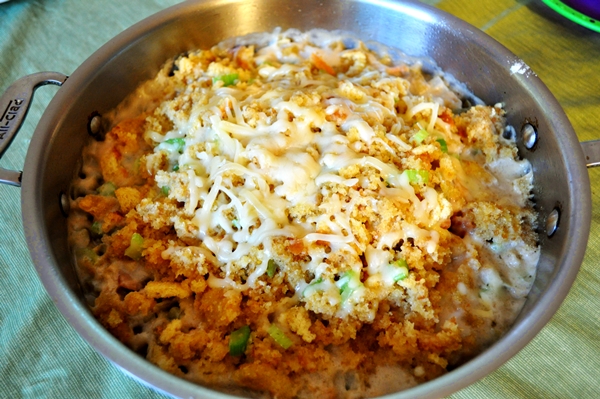 One of my favorite holidays is Thanksgiving because of all the delicious foods and especially the stuffing. It doesn’t matter to me if it comes from inside the bird or a casserole dish — I can never get enough. And if it’s cornbread stuffing… then I’m yours forever. Since I’m such a huge stuffing fan, I’ll eat it at any chance I get; I don’t care what month or day it is. The only thing I don’t like about stuffing is it usually needs to go inside a chicken or turkey, so the cooking time is twice as long than if the bird were empty. So you can imagine my elation when Taste of Home came out with a recipe that not only included stuffing but sprinkled it on top of chicken breasts. It was still delicious and the cooking time was minute. Best of all, I got to make the whole thing in just one pan. So if you’re craving stuffing, and come on, who isn’t, try this stovetop chicken ‘n’ stuffing. You won’t need an excuse (or a holiday) to make it again and again.

Other Stuffing Recipes from SheKnows