If you’re like many people, you go by what others have to say about a restaurant before you consider trying it. And you likely also rely on Google to find information you need. Looks like combining the two will now be getting easier. 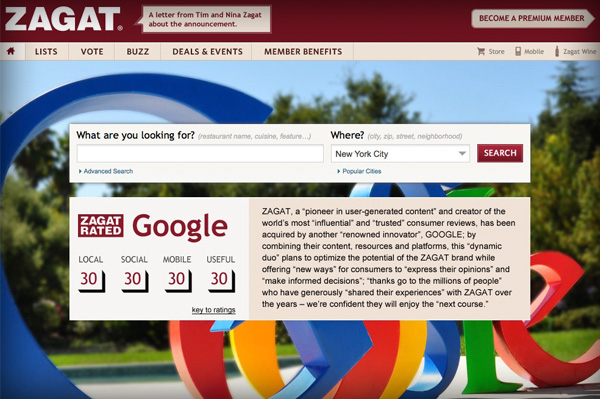 It was announced that Google has acquired Zagat, the well-established company best known for its restaurant reviews. Zagat has an online presence with a paid subscription base, but is more widely known for publishing its maroon-covered, pocket guidebooks that include a rating scale, consumer reviews and opinions of restaurants and bars worldwide. You’ve likely seen the “Zagat rated” phrase on some restaurant menus or reviews you’ve considered.

It’s said that Zagat was one of the first to implement user-generated content, in the form of its reviews and surveys. The company was started by Tim and Nina Zagat more than 30 years ago and will remain with the business.

Marissa Mayer, Google’s vice president for local, maps and location services, stated that about 20 percent of Google’s daily searches are for places nearby those doing the searching. She noted that the Zagat reviews would complement Google’s Places tool, an online feature that allows people to rate and review what others have to say about local establishments. Google intends to continue publishing the hardcopy Zagat guidebooks for the time being but will likely focus on online review opportunities.

Zagat’s largest online competitor is Yelp — a company that Google tried to purchase two years ago but was unable to acquire. Yelp is widely known for its own search and user-review features for local establishments. In Zagat, Google gains a trusted resource to help people find what they want to know about dining, travel and other leisure activities.