Related story Mom’s Off Duty! 5 Ways to Enjoy Some Truly Indulgent Me-Time Tonight (And Most Nights) 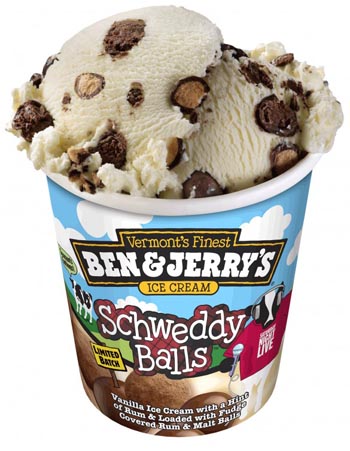 Schweddy Balls…does the name make you want a scoop of ice cream? Ben & Jerry’s thinks it might. Back in June, NPR ran a story about a rumor started by Ana Gasteyer, funny lady and former Saturday Night Live star. She said you could soon eat your very own Schweddy Balls. Do you remember the Schweddy Balls skit?

NPR summed it up perfectly:

They just had to throw “balls” in the description, too, huh?

NPR talked to Ben & Jerry’s spokesman Sean Greenwood. “We’ve always been a company that has had a sense of humor,” he said. “This is just plain silly.”

We agree, but it’s pretty darn funny, too. Schweddy Balls ice cream is available in pints at about one third of the stores that sell Ben & Jerry’s, as well as at Scoop Shops.

Riding the wave of silliness, Ben & Jerry’s is taking this opportunity to make their marketing fun. You can even send a Schweddy Balls greeting card from the Ben & Jerry’s Facebook page.