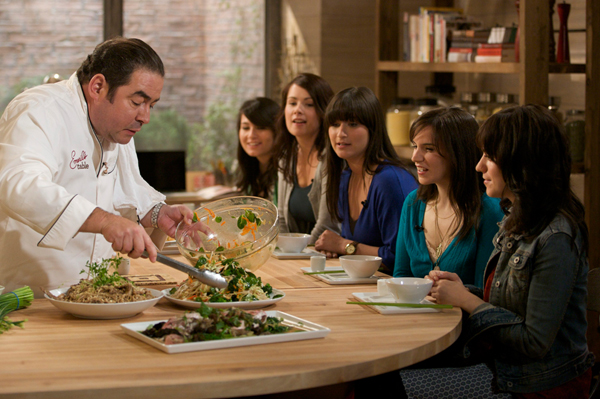 Many of us got acquainted with the Cajun cooking king on Emeril Live on the Food Network, where he used catch phrases like “Bam!” and “Kick it up a notch!” plus a live band to get a 200-person audience in party mode.

But for his new daily cooking show, Emeril’s Table on the Hallmark Channel, the theatrics have been scrapped. For each episode, just five guests are invited to the table for the ultimate cooking lesson. They’re newlyweds, busy moms, firefighters and vegetarians — real people who just want to learn how to get a fresh, delicious dinner on the table every night.

Emeril uses words like intimate, mature and intellectual when talking about Emeril’s Table, which premieres at 11 a.m. ET on Sept. 26 on the Hallmark Channel.

“There’s not a lot of ‘Bam!, Bam!, thank you ma’am,'” Lagasse said during a phone call with the press on Wednesday. “It’s sort of like Emeril’s grown up … meaning that I’m serious but yet a little bit experienced, so I’m not so TV (oriented). I’m crossing boundaries that I normally wouldn’t have done when I was younger.”

The goal of the half hour show is to take the intimidation factor out of cooking and get back to basics.

“What you’ll see is real food, cooked in real time. There were few times where we actually had to swap food,” he says, referring to the prepared dishes that TV chefs use to show the result of a recipe in a time crunch. That, he says, makes the show right for home cooks.

“We have to rethink the food plan … so that by the end of the day we’re not ending up in some concrete parking lot to order from the window,” he says.

In his own home, planning is key to getting a meal on the table while juggling his kids’ afterschool activities like football and cheerleading.

“The family table in my house is very, very important,” Lagasse says. “As a matter of fact, my kids have a joke that when we get up in the morning, I usually ask them what they want for dinner or what we’re having for dinner before even asking what’s for breakfast.”

“We have a well-stocked pantry. We try to buy perishable protein and vegetables on a daily or every-other-day basis.”

On Emeril’s Table, he’ll encourage his guests to do the same by offering tips on buying fresh foods, reading labels on packaged foods and making smart grocery shopping choices. He’ll address timing and technique in the kitchen, and throw in a little food history, too. 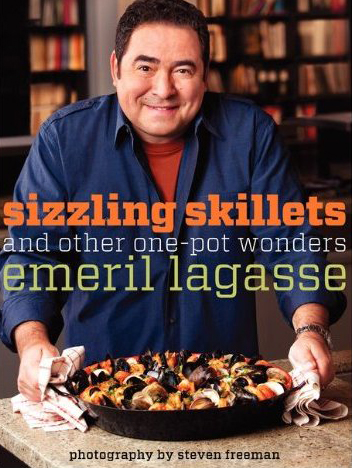 The evolution of TV cooking

Nearly every cooking show these days seems to target the eager and sometimes bumbling home cook, but Emeril is no stranger to the genre.

“I started it, and I’m not saying that sarcastically,” he says. “I had 12 seasons of Essence of Emeril back in the ’80s and helped launch the Food Network from zero now to 100 million homes.”

“I’ve done a lot of television, I’ve shot a lot of shows. I gotta tell you, I’m super, super proud of Emeril’s Table.”