Bill Clinton was known for his rather large appetite during his presidency, but times have changed. And so has Clinton. He recently revealed that he follows a vegan diet. 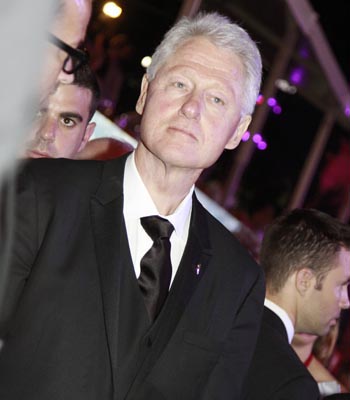 Bill Clinton had love affairs with burgers, fries and donuts… but it’s over. Finished with what Clinton called a game of Russian Roulette, the former leader of the free world cut meat, dairy, eggs and almost all oil from his plate and committed to a vegan diet.

Why the change? It’s no secret Clinton wasn’t the healthiest of eaters during his presidency. As CNN shares, First Lady Hilary Clinton began working on President Clinton’s diet in 1993, when she asked Dr. Dean Ornish, director and president of the Preventive Medicine Research Institute in Sausalito, California, to help the White House chefs clean up their cooking a bit.

While the chefs made some changes, those weren’t enough to keep Bill Clinton healthy. He gained weight over the years and in 2004, after experiencing tightness in his chest, Clinton had quadruple bypass surgery. Feeling fortunate that he didn’t die of a heart attack, Clinton further cleaned up his diet, cutting calories and lowering cholesterol.

After Clinton returned from his relief work in Haiti last year, he had yet another procedure to place stents in one of the veins from his bypass surgery. Ornish gave it to Clinton straight: “I told him, ‘The friends that mean the most to me are the ones that tell me what I need to hear, not necessarily what I want to hear. And you need to know your genes are not your fate. And I say this not to blame you but to empower you. And I’m happy to work with you to whatever extent you want,'”

Clinton took Ornish up on his offer and worked with him, ultimately committing to a vegan diet. “All my blood tests are good, and my vital signs are good, and I feel good, and I also have, believe it or not, more energy,” Clinton reported.

Hopefully on his new vegan diet, Bill Clinton can reach his latest goal: Getting his weight down to what it was when he was 13 years old — 185 pounds.