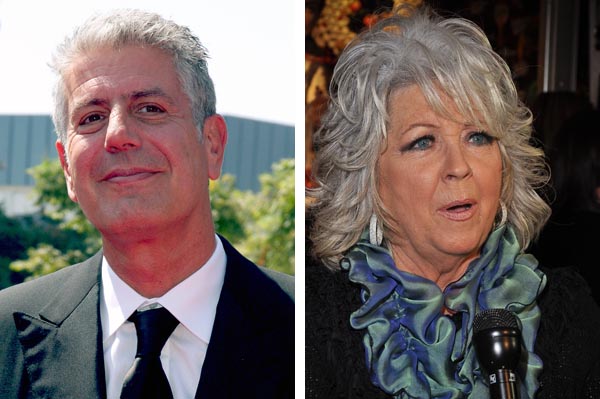 Anthony Bourdain had a few things to say about Paula Deen and her cooking in this month’s TV Guide. The New York Post reported Bourdain’s comments about Deen and… ouch! While he also insulted Rachael Ray, Guy Fieri and Sandra Lee, his words about Deen were the most biting.

Nobody will argue that Paula Deen’s cooking is healthy and she has certainly received criticism about it before, but Anthony Bourdain did a little more than cut to the chase. He called her “the worst, most dangerous person to America.”

Not so nice, but it gets worse. “She revels in unholy connections with evil corporations, and she’s proud of the fact that her food is f–king bad for you,” Bourdain said in the interview.

“I would think twice before telling an already obese nation that it is OK to eat food that is killing us,” Bourdain continued. And then he finished with the ultimate insult: “Plus, her food sucks.”

Paula Deen isn’t taking the verbal punches lying down, though. When the New York Post reached out to her for a response, she didn’t hold back — although she kept it a bit classier.

“Anthony Bourdain needs to get a life. You don’t have to like my food, or Rachael’s, Sandra’s and Guy’s. But it’s another thing to attack our character,” Deen said. “I wake up every morning happy for where I am in life. It’s not all about the cooking, but the fact that I can contribute by using my influence to help people all over the country. In the last two years, my partners and I have fed more than 10 million hungry people by bringing meat to food banks.”

Deen defends Rachael Ray, Guy Fieri and Sandra Lee, saying they are some of the most charitable people she knows. “I have no idea what Anthony has done to contribute besides being irritable,” Deen added.

Paula Deen finishes her defense with a pretty clear message to Anthony Bourdain. “You know, not everybody can afford to pay $58 for prime rib or $650 for a bottle of wine,” she said. “My friends and I cook for regular families who worry about feeding their kids and paying the bills . . . It wasn’t that long ago that I was struggling to feed my family, too.”

Anthony Bourdain said that he was done commenting yesterday, tweeting: “Next time I’m asked (for the millionth time) who the worst cooks on Food Network are, I’ll just shut up. Who cares?” Let’s see if Bourdain keeps that Twitter promise.

>> What do you think? Is Anthony Bourdain correct about Paula Deen and her unhealthy cooking, or is Bourdain just being mean?