Raising a healthy eater begins early, with parents and caregivers. Here are ways that you can instill the foundations of healthy eating from that first spoonful of food, right up until they move out and start making their own meals. 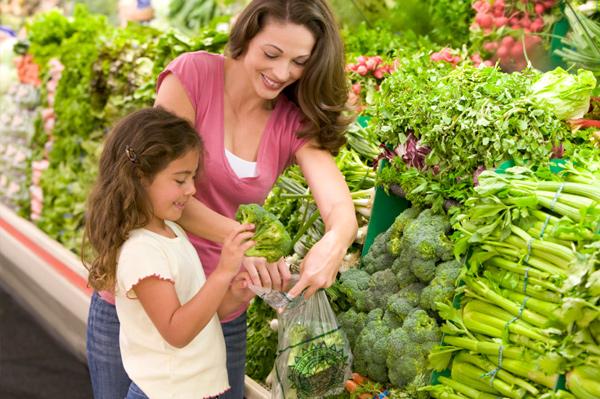 While part of a parent’s job is providing structure, it’s also important to teach kids to listen to their body’s hunger and satiety signals. Rosanne Rust, M.S., R.D., L.D.N., registered dietitian, online weight loss coach and author, advises parents against mandating eating times by the clock (as in, “lunch is at noon” and “dinner is at five”). The rule even applies to infants (unless they have a medically directed need to eat more frequently). Forget the clean plate club, too. Rust advises to never force or bribe a young child to eat if she claims not to be hungry. (You can require, however, that she sit politely with the family through at least part of the meal.)

Rust also advises making a fun game of shopping for foods, inviting kids to pick out their own fresh produce items to try at the store each week. Pick out a recipe together, and let kids help in the easy prep phases such as washing, peeling and measuring. Not only will your kids be more likely to try the new foods they helped prepare, but they’ll also gain confidence in learning a new skill, such as cooking.

Eating is not a hobby.

Studies show that people who eat snacks while watching television programs practice mindless eating. As a result, they consume more unintended calories than those who eat at a table, noticing and enjoying every bite at a slower pace. While the act of family dining and cooking with others is to be enjoyed, make certain that kids understand that eating chips in front of the television is not a form of entertainment.

Leave the junk at the store.

It sounds simple, but a huge part of eating processed foods comes down to whether or not they’re readily available. Just as you come home from work ready to lunge at the first box of cookies you see after a rough day, your kids will do the same. From there, bad habits of eating for comfort start — and can be a lifetime battle to overcome. Remove the temptation entirely and leave the junk foods on the shelves where they belong.

Watch what they drink.

Even 100-percent juice is sugar-laden, and real fruits and veggies are always better than the juice form. Limit kids’ intake of juice starting at a young age, and make certain that they drink plenty of water and milk in place of sugary liquids.