When you come across a recipe with a term you don’t know, it can be enough to tempt you with takeout for a month! Don’t let cooking terms intimidate you. Consider this guide your key to whipping up anything from A-to-Z (Part I). 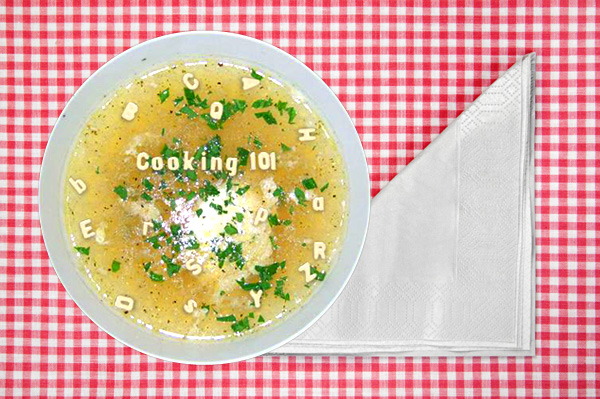 These 10 cooking terms will have you whipping up dinners and desserts, breakfast and baked goods like a pro. The focus for Part I of this feature is on a few terms from A-to-J.

Al dente – In Italian this means “to the tooth.” This refers to pasta being cooked just until it is firm — not crunchy, but definitely not mushy.

Blanch – To blanch something, typically fruit and vegetables, means to immerse it in boiling water for only a few minutes, to cook it slightly or to loosen its skin. Usually after blanching, the food is immediately rinsed or plunged into ice water to keep it from cooking any more.

Bouquet garni – French for “garnished bouquet,” a bouquet garni is a bundle of herbs tied together or placed in a cheesecloth packet, and cooked with other foods, like soups and stews, to flavor it. The bouquet garni is removed prior to serving and eating the food and is often made with thyme, bay leaves and sage, but any number of herbs can be used, as well as vegetables like carrot or celery.

Clarify – Often you’ll see a recipe that calls for clarified butter. It means separating and removing solids from a liquid to make it clear. To clarify butter, it’s heated, then the clear yellow fat is poured off to leave the milk solids behind. You can cook with clarified butter at a high temperature without the risk of it browning or burning.

Cut in – This is done when baking. It means to incorporate cold, solid fat (like butter), into the dry ingredient (like flour) with a pastry blender or fork until the mixture looks like coarse crumbs or pea-sized bits. The purpose is to cover the fat (butter) with the flour to make the dough flakey, not like cookie dough.

Deglaze – This means to loosen the food left behind on the bottom of a pan (usually meat) to make a pan sauce. The pan is heated and liquid, like vegetable or meat stock, is added to it as you scrape. This is a basic way to make many sauces and gravies.

Double boiler – This type of pan is used to cook things that shouldn’t be cooked over direct heat, like custards, or used to melt chocolate or other sauces without burning them. The pan has two parts, with one pan fitting into the other. The bottom pan holds simmering water and the top pan rests over the water without touching it.

Fold – To gently add and mix a light mixture, like beaten egg whites, into a heavier mixture. This is done by gently cutting through both mixtures, moving from the top to the bottom while rotating your bowl.

Ganache –Made by melting chocolate into heavy cream, ganache is used as a dessert filling or as a glaze or icing. The chocolate-to-cream ratio can be tailored for different purposes.

Gluten – Gluten is a protein found in wheat, barley and rye. Gluten provides elasticity to dough, helps it rise and keeps it chewy. Gluten can be found in many food products. People with celiac disease have a sensitivity to gluten, which can cause damage to the small intestine and doesn’t allow food to be properly absorbed. There are many substitutions now available for recipes that would normally call for wheat, rye or barley.

Jellyroll pan – A shallow baking sheet (about an inch deep) with a rim sometimes used to make thin sheet cakes. These cakes are often rolled around fillings (like a Yule log) which, when sliced, give a spiral effect to the dessert.

Keep this list handy when the mood for making a new recipe strikes — no flash cards necessary!