What would you eat if you lived in a food desert? More than likely you’d eat at fast-food restaurants and do your grocery shopping at convenience stores where your options are limited to frozen pizzas, chips and soda. According to First lady Michelle Obama, that’s about to change. 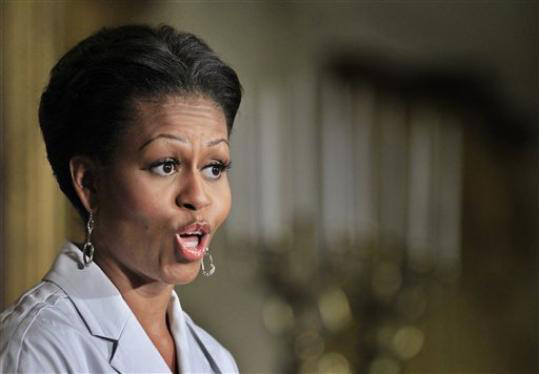 Many of us take for granted the fact that we can run to the grocery store to pick up broccoli, bananas, orange juice, low-fat yogurt and many other healthy foods whenever we please. Others aren’t so lucky.

To help feed America, Michelle Obama has teamed up with several of the nation’s largest retail chains with the commitment to help provide access to fresh food for people who live in food deserts.

The announcement was made at the White House Wednesday, where executives from Walmart, Supervalu Inc and Walgreen Co were present. The first lady has been working to combat childhood obesity via the “Let’s Move!” initiative. Now a goal within the initiative: eliminate food deserts within six years.

What is a food desert?

A food desert is a community, usually in an impoverished area, whose residents don’t have easy access to grocers or markets nearby where they can shop for fresh fruit, vegetables and other health foods.

Instead, many of these communities only have easy access to convenience stores, where pre-packaged, processed foods heavy in sugar and fat are more widely available. These unhealthy foods can contribute to obesity, high blood pressure and other health diseases.

Where do food deserts exist?

According to the U.S. Department of Agriculture (USDA), to qualify as a “low-access community,” at least 500 people and/or at least 33 percent of the census tract’s population must live more than one mile from a supermarket or large grocery store. In rural areas, the distance is 10 miles.

>>Curious to see if your community is located in a food desert? Check out the USDA’s Food Desert Locator tool.

What is the plan?

Walgreen, the nation’s largest drugstore chain, is committed to open or convert 1,000 of its stores over the next five years to carry fresh fruits, vegetables and other healthy foods. These stores are expected to create about 40,000 jobs.

Supervalu is scheduled to open 250 Save-A-Lot stores in food desert areas over the next five years, and create about 6,000 jobs in the process.

The USDA estimates that about 13.5 million people live in food deserts nationwide, with the majority (82 percent) in urban areas.