As NASA’s space shuttle Atlantis heads back to Earth this week, use the historic event to throw a space-themed party for your kids that is out of this world and educational at the same time. Here’s how. 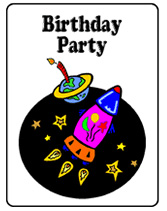 You can turn the invitations into a craft activity by making your own space shuttle invites with the kids using construction paper and shuttle photos from magazines or the Internet, download space-themed invitation templates, or design invitations on your computer and email them.

Educational opportunity: Teach your kids the names of the space shuttles. If you need to get your own learn on, they are: Columbia, Discovery, Challenger, Endeavour and Atlantis.

Visit your craft or fabric store for large black sheets to hang on the walls. Stick space-themed items, including the sun, stars, half moons, planets, asteroids, astronauts, and shuttles, to the sheets. NASA’s website has a variety of hands-on activities, such as rocket ship templates, that can give you some fun decorating ideas. Hang planets made of Styrofoam balls from the ceiling and set up 3-D models of rockets around the party space.

Educational opportunity: Make one of the party games a craft activity in which the kids get to color, draw, or design (with play-doh or clay) the sun, planets, stars, asteroids, or shuttles.

Space-themed games for the kids 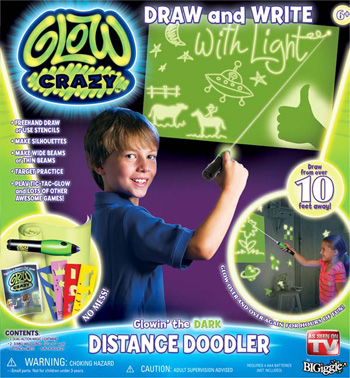 The sky’s the limit for space-themed games. Have the kids play space-themed trivia; you can make up the questions based on the age group. If the kids can’t sit still, turn off the lights and have them play with the Distance Doodler, a laser pen they can use to draw on the wall (don’t worry, it won’t mark the wall), or Fyrflyz, a toy that lets the kids create their own light show. You can also have them work together or in teams to put on the best space-themed show. For the little kids, you can simply have them tell stories about what they would do if they went to space.

Educational opportunity: Trivia by itself is educational, but you can use every game as an open door to teach the kids: the names of the planets, about gravity (or lack thereof), the difference between stars and planets, what the astronauts do while in space.

Have fun with your party food and either make up space names for the dishes (i.e. planet meatballs in tomato space sauce) or check out NASA’s space shuttle food fact sheet for a list of space shuttle foods to design your party menu. Astronaut food isn’t that unusual, consisting of everyday meals like cereal, scrambled eggs, mac and cheese, tuna, beef, applesauce and even butterscotch pudding. Be sure to add a space-themed birthday cake and serve food on space-themed partyware, such as these Space Odyssey Dessert Plates.

Educational opportunity: Teach kids about the perishability of foods. For example, fresh fruits and vegetables are most perishable and astronauts need to eat these within the first couple of days after take-off. Freeze-dried foods have a far longer shelf-life, for a minimum of two years, as required on the space shuttle. 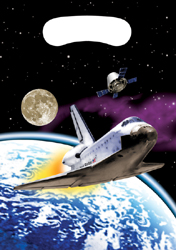 Educational opportunity: Invite the kids back for an evening of star gazing using the constellation maps.