Orange marmalade is one of those jams that’s an acquired taste; it’s not too sweet, and just a little tangy. While some people may not like it on bread, use it as a marinade for chicken, and you’ve got a sweet and tangy dinner entrée. 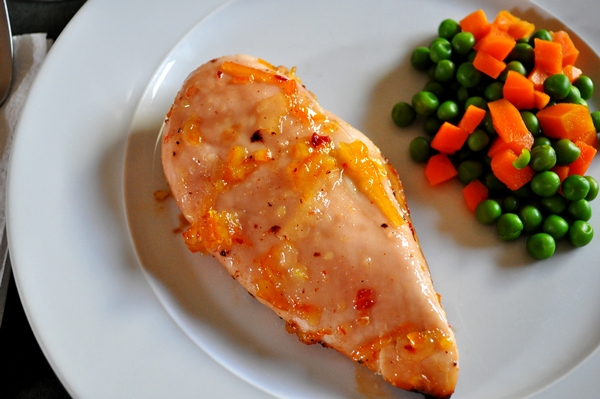 I hate marmalade, I’ve just never been a fan. I don’t know why: maybe it’s because the marmalade has bits of orange peel in it; maybe it’s because it’s a little more sour than sweet; or maybe it’s the color. Whatever the reason, I don’t like it. I’ve tried it occasionally hoping maybe my taste buds will have evolved and I’ll appreciate the popular jam, but every time I’ve tried it the same thing happens—my lips curl in disgust and my toast goes uneaten.

So you can imagine how unenthused I was when I saw this spicy orange chicken recipe from Real Simple. At first I was excited because I thought it was going to call for orange juice (of which I’m a huge fan). But, when I saw marmalade was the first ingredient, I sighed with disappointment until I read further and realized it was being mixed with some Asian chili, salt, and pepper, as well as the juices from the chicken. At that, I figured I’d test the recipe out. Worst case scenario, I’d end up having to make something else for dinner.

Well, not only was my family thrilled with the sweet and spicy chicken, I was thrilled with it, too. It had just the right amount of bite and plenty of sweet tang to make me crave another piece. Paired with some delicious petite peas, it ended up being the perfect family dinner.