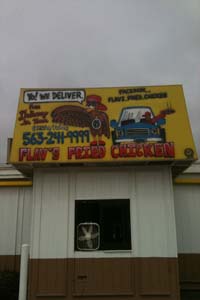 Clinton, Iowa is saying goodbye to rapper Flavor Flav and his fried chicken joint – the store is now closed.

“I’m shutting the place down because I don’t want to be involved with Flavor Flav,” store owner Nick Cimino told the Quad City Times.

“I had a licensing agreement with Nick Cimino and that’s all we had. It was his business to run from there, and the business was not run right,” Flav told TMZ.

“It wasn’t mismanaged by me. He mismanaged it right from the beginning because he didn’t know what he was doing,” Cimino countered. He wanted to be an active partner in the business when he didn’t even know what was going on.”

Now, Flav is set to take his chicken to Las Vegas.

“I just feel sorry for the Riviera for getting involved with him,” Cimino said. “It’s going to be a disaster.”

Cimino is trying to stop that from happening. 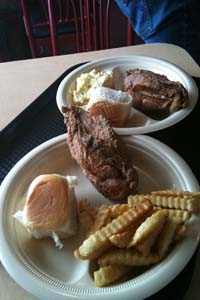 And the community isn’t really that upset at the loss – area resident Melissa Strutz ate at Flavor Flav’s chicken last week and said it was disgusting.

“Even looking back a few days later, the whole place is a big joke. I am absolutely astounded that he has managed to convince people in Vegas to bring his establishment out west. It seriously looked like someone had spray painted over a Long John Silver’s building,” Strutz told SheKnows.

“They were out of the cornbread and it took 15 minutes for me to get my meal because they had to fry more chicken. The place smelled good from outside, but once you got inside and saw the whole…mess, it became less appetizing.”

Get ready for that, Las Vegas.

The Best Pasta Makers For an Authentic, Homemade Italian Meal

16 Slow-Cooker Chicken Recipes That Are Anything But Boring