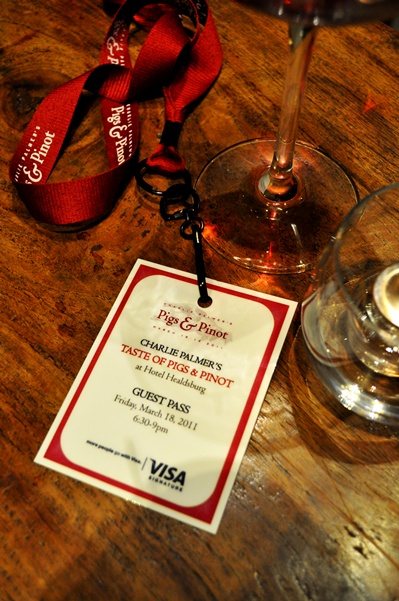 Last weekend was Charlie Palmer’s annual “Pigs & Pinot” event up in Healdsburg: two days filled with seminars, cook-offs, and all the pork and pinot noir one can drink. Foodies from all over clamor to attend any and all the events. Not an easy ticket to attain, I was lucky enough to get into the first event of the weekend — “A Taste of Pigs & Pinot”, an evening celebrating creations from 60 wineries located in and around Dry Creek, Russian River, and Alexander Valley.

Even in the rain, guests were lined up outside, waiting for the event to start Friday night. Taking over the lobby of Palmer’s Hotel Healdsburg as well as his restaurant, Dry Creek Kitchen, there were 25 stations all filled with food and drink. Since 60 wineries were participating, they separated the wines into 5 locations according to their names. The L’s thru R’s seemed like a good place to start since that table was located directly across from Marc Forgione, winner of Season 3’s The Next Iron Chef. 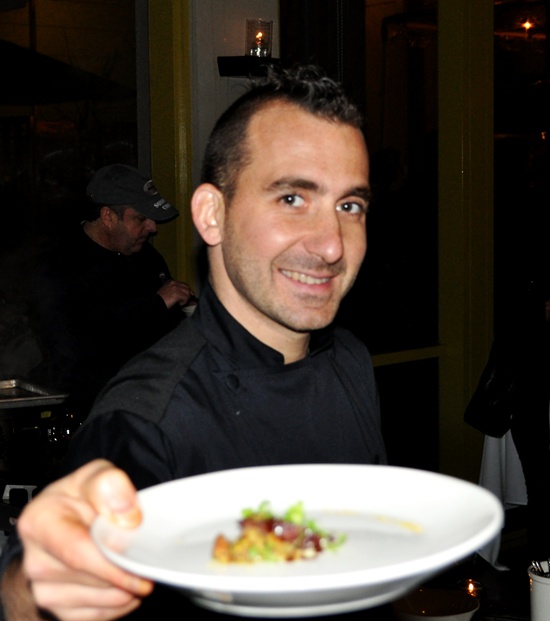 Fornione was serving two dishes, a blood sausage wrapped in pork loin and served with a curried granny smith apple chutney and a Creme Fraiche Agnolotti with bacon and potato brown butter. 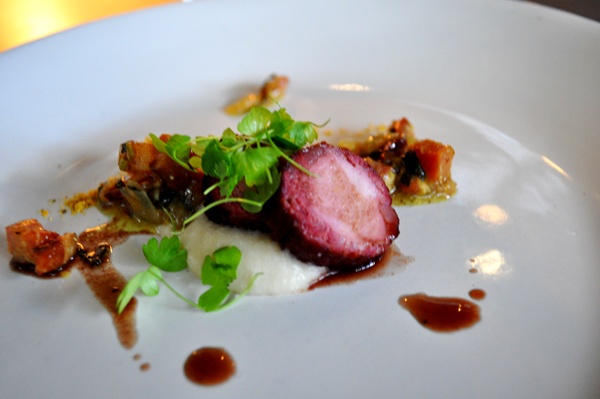 The sausage popped with rich, hearty flavors and the apple chutney added the perfect tart sweetness to the salty meat. Forgione said his agnolotti was filled with “all the toppings you’d find on a baked potato.” And you could taste each and every one of them – the bacon, the creme fraiche, even a few pieces of potato… it was so good, patrons were seen heading back for seconds later in the evening.

Some of the wines located across from Forgione included Martinelli, Paul Hobbs, Radio Coteau, and Rochioli. The Rochioli and Martinelli were two favorites. As were the pinots from Merry Edwards and Papapietro-Perry. Those wines were so popular in fact, they ran out before the night was over.

Charlie Palmer’s station was up next, and if you were going to try any food at the event, Palmer’s was not to be missed. He made a roasted pork loin and a sausage that was made up of three different kinds of pork, including wild boar and two pigs he’d chosen and raised himself specifically for the Pigs & Pinot event. By overseeing the pigs’ diet of vegetable trimmings and spent grain and barley from nearby Bear Republic Brewing Company, Palmer was able to produce a richer marbling and sweeter fat which helped create some of the best sausage ever. The perfect amount of salt and spices coupled with the wild boar heightened the dish to a whole other level. If there hadn’t been a long line waiting for a bite, guests probably would’ve requested a whole link. 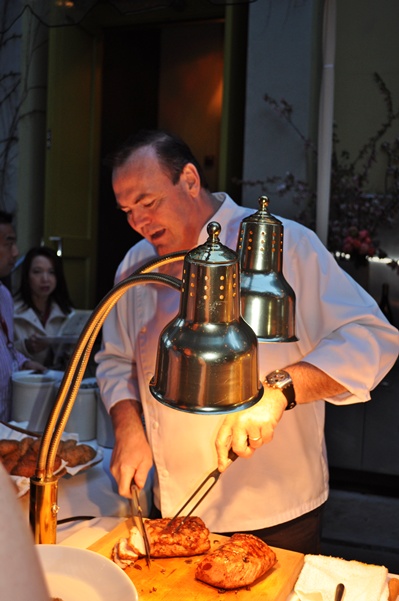 Wines from the E-K table paired with Palmer’s dishes perfectly. Emeritus, Etude, and Hartford Court being some of the best. The earthy, dry flavors of these three wines really accentuated the rich flavors of the loin, but especially Palmer’s sausage.

After delicious tid bits from chefs Forgione and Palmer, it was impossible to imagine anything else would even come close to these delicacies. But there were two happy surprises waiting out back in the Carriage House: Bryan Voltaggio and Domaine Parent. Voltaggio owns the Volt restaurant in Maryland and was a finalist during season 6 of Top Chef (he lost to his brother, Michael). Voltaggio created something he called Crispy Pork Trotters, a pork loin, wrapped in crispy bacon and then covered it in a baked bean-inspired pine nut sauce. To. Die. For. The fact that he only had enough for 1 bite per person killed everyone there. 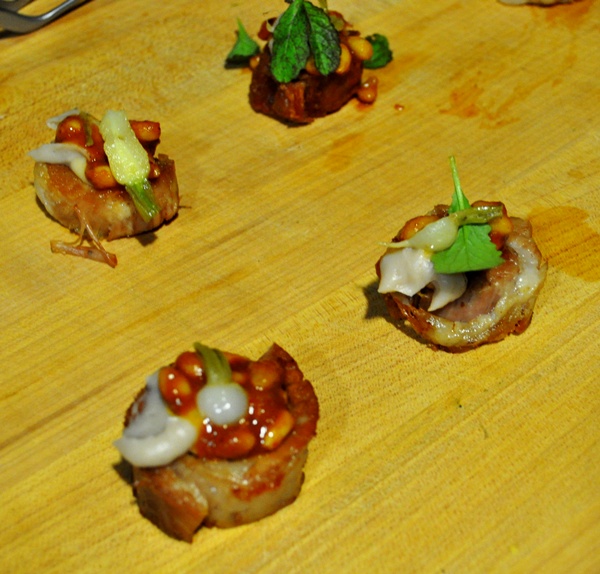 Domaine Parent was the pinot noir lucky enough to take home the coveted Pinot Cup, the award for which the event was taking place. Already a popular choice by most patrons, the win made the wine the most sought after drink at the event. It was so popular in fact, they ran out of it before the night was over. So while unable to sample it myself, most patrons agreed the winery absolutely deserved the win. 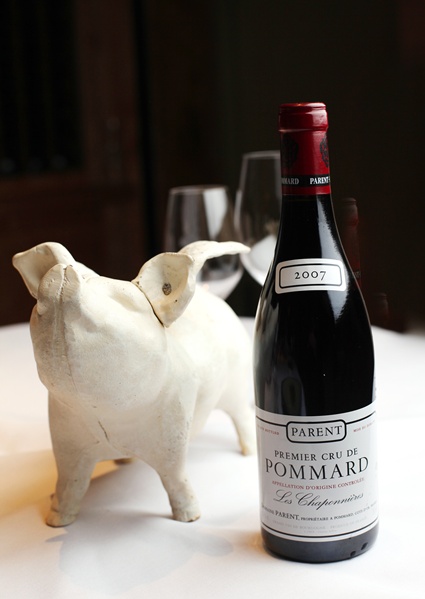 After a few hours of food and drink, it was impossible to imagine anything could top the delectable dishes that had been served. Then dessert came out. While everything from the Green Eggs and Ham Macarons to the bacon bon bons were amazing, the dessert that had everyone clammoring for seconds and thirds were Yulanda Santos’ Twinkies. These evil little bite-sized cakes weren’t just filled with cream, they were stuffed with a mouthwatering bacon bourbon caramel mousse. It was rich and creamy and the whole little cake, just melted in your mouth.

The evening was definitely a night to remember. And the perfect introduction of what to expect the rest of the weekend. But a night like this, with all that wine and food from celebrity chefs isn’t free. Tickets cost $150 per person. Why so pricey? All the proceeds go to Share Our Strength, a national non profit focussed on ending childhood hunger in America, and local Healdsburg education. But when all that amazing food and wine comes with that price tag, it’s easy to see why Pigs & Pinot sells out every year.