Sunny Anderson, host of the Food Network show, “Cooking for Real,” doesn’t want to talk about the Super Bowl. “The (New York) Jets aren’t going, so I don’t want to discuss it,” the New Yorker says. 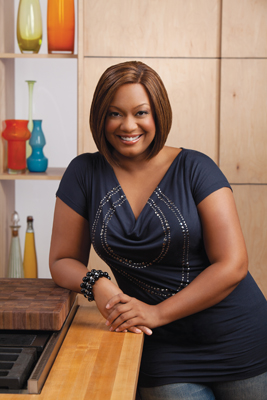 But of course she wants to talk about the Super Bowl. It’s practically a holiday and holidays mean food.

For Sunday’s battle between the Pittsburgh Steelers and the Green Bay Packers, Anderson envisions a game day menu not unlike her show: updates on classic comfort foods. “I like doing things that you know of, that are tried and true, but in my own way,” Anderson says. For example, she might freshen up a staple like guacamole with diced mango or pineapple.

Should you ever get invited to watch the Super Bowl at Anderson’s house, know this rule: There’s time for food, and then there’s time for football. “I like people to show up for pre-game, not just at kickoff or halfway through the first quarter. Don’t come late just to have a bite. Come hang out, let’s eat and enjoy each other while we can, because when the game is on, it’s (time for) concentration,” she says.

Even with the Jets out of the picture, she has a pick for Sunday’s game. Her parents live in Pittsburgh, she went to high school there and a friend plays for the Steelers.

SheKnows.com caught up with Anderson to chat about her favorite Super Bowl food, a potluck dish that’s on the lighter side, and what Food Network star’s cooking line she uses at home.

SA: I do traditional with a twist. For my deviled eggs (recipe below), I like to add jalapeño peppers to kind of spice it up a bit. Then put some fried onion over the top for textures?just little different things that you can do that are familiar but an easy sell.

When I do nachos, instead of doing the traditional chips, shredded cheese, onions, and maybe black olives, I like to make a white cheese sauce and use rotisserie chicken (recipe below).

SK: Any advice for gals who are asked to bring a dish to a potluck but aren’t getting tons of direction from the hostess?

SA: Take a dessert. You can never have too many desserts; people love variety in desserts.

I love my orange lime pie (recipe below). It’s really easy to make. It’s like key lime pie, but with orange and lime together. It’s light and bright and really easy to travel with; you don’t have to worry about putting it in to the car at the right angle. You can make that a couple days in advance.

SK: So many Super Bowl dishes are gut bombs, can you suggest a snack that’s on the lighter side?

SA: My mango and jicama slaw (recipe below). I serve it on pineapple wedges. It’s got honey in it so it’s sweet, plus mango, jicama, and cilantro. I hollow out the center of the pineapple (cut it in half lengthwise, first), and put the salad in there; it’s really pretty.

SK: You used to co-host “Gotta Get It,” a Food Network show devoted to cool kitchen gadgets. What would you feature on the show today?

SA: I would be talking about my countertop turkey fryer. It has rocked my world for the last three months. You know, you’re not supposed to fry a turkey inside. I didn’t get a chance to give it a try until the day of Thanksgiving. I said, ok, fine, this is my one bird?I’m going to test it out indoors.

The turkey was amazing. Of course, we all know frying is a lot faster. Plus, it was juicy. I brined it for two days.

SK: We see your “work” kitchen on TV. What’s your kitchen like at home, and how often do you use it?

SA: When I’m taping my show, I never use my kitchen because I’m cooking at work. But when I’m not taping, I use it pretty much every day.

I have two kitchens (at home). One is more of a professional kitchen and it has my Wolf range. I have a six-burner with a warming plate in the center and a double oven, which I love. I need it, when I’m in recipe testing.

SK: What’s next for you? Do you have any branded cookware or food product lines in the works?

SA: I’m going to start working on my cookbook this year (based on “Cooking for Real”).

As far as merchandising, I don’t really have plans. I’m an organic person; I let things work themselves out rather than planning to have a line of something. I truly just enjoy the cooking show and sharing recipes. If you were to ask me right now what I would come out with, I’d have no idea.

Sometimes people say, “When’s your (cooking) pot line coming out?” And I say, as soon as Emeril Lagasse’s (cookware line) isn’t good, I’ll come out with one. I love Emeril’s, that’s what I use at home.

Looking for a little game day inspiration? Check out a few of Anderson’s favorite recipes. >>