It looks bad, it smells bad—Chef and TV food personality, Anne Burrell, must take a bite—it tastes bad, too. Repeat. 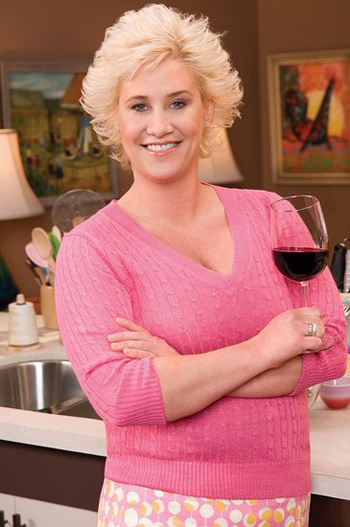 These are the opening scenes of “Worst Cooks in America,” the Food Network show that Burrell co-hosts with Chef Robert Irvine. The second season began January 2.

The show is a culinary boot camp for awful home cooks, and there are some icky moments as Burrell takes her team through new culinary challenges each week. Turns out, not everyone knows to wash up after touching raw chicken. Eventually, things get better for them (and Burrell).

What’s this pro, graduate of the Culinary Institute of America, and sous chef to Mario Batali on the Food Network’s “Iron Chef,” doing with this riff raff?

It’s actually pretty heartwarming to see these home cooks get better—good, even, according to Burrell.

Burrell has worked in some of New York’s top restaurant kitchens and also stars in another Food Network show, “Secrets of a Restaurant Chef,” where she teaches viewers how to recreate restaurant-worthy dishes at home.

Here, Burrell chats with us about good food (hers), bad food (theirs) and her debut in the foodie-themed holiday windows at Barneys New York.

Q: “Worst Cooks” requires you to taste a lot of bad food. What made you say yes to this?

A: I used to teach culinary school for a long time, so, sadly, I have tasted a lot of bad food in my career. I just felt that this was par for the course. This time I was just doing it on TV.

(The contestants) start off really bad, but then it’s amazing how much they actually improve. It’s this cast of lovable losers. You see them dig deep within their soul and make their big transformation. (They see) how confidence in the kitchen translates into confidence in life. It’s quite delightful.

Q: One contestant on the second season said she’d given her husband food poisoning twice. Are the contestants really as bad as the show makes them out to be?

(The Food Network) did a really good job at weeding out the people they thought were fakers. There’s one guy who said, “I cooked a grilled cheese with an iron.” Really? Come on. He didn’t make it (on the show). Everybody that we saw had been screened and was really, truly that bad.

Q: “Worst Cooks” pits contestants against each other, but also you against Chef Irvine. Are you the better chef?

A: Absolutely, without even a hesitation. I’m more thoughtful, my food tastes better, and my food is more updated.

Q: What is something that home cooks do that’s frustrating to you?

A: They don’t taste their food as they go, and they don’t read the recipe. For all the people that show up for “Worst Cooks,” I ask, “Have you read a recipe? Have you ever opened a cookbook?” And they say, “Oh no, I don’t like recipes. I can’t follow recipes.” Really? I don’t know why they think they can just skip the cookbook phase and jump right in there. If you know you need help with something, go get reference material. Read your recipe from start to finish and see where you’re going.

Q: Speaking of cookbooks, you have one coming out next fall called “Cook Like a Rock Star.” What’s it all about?

A: “Cook Like a Rock Star” is loosely based on my show “Secrets of a Restaurant Chef.” There are a couple of recipes from the show, but most are new, and the recipes are written exactly in the language that I speak on the show. I try to take things out of cooking terms and put it in everyday language that someone who hasn’t gone to culinary school will understand. People who are advanced cooks will be interested in making these recipes also.

Q: What is a typical Christmas dinner like for you?

A: I go upstate (New York) to visit my family. I’m from a little tiny town outside Syracuse called Cazenovia. I go and cook at my sister’s. I’m tossing between a brisket braised with mushrooms and bacon and lots of balsamic vinegar, or braised short ribs (recipe below).

Q: You’re featured in a holiday window at Barneys New York in New York City along with Paula Deen, Ina Garten, Martha Stewart, and Sandra Lee. What’s that like?

A: It looks like I’m trapped in an oven and my face is pressed against the oven door from the inside; my hair is coming out of the oven door, like flames.

I’m so excited about it. Last Thanksgiving, I got to ride in the Macy’s Parade (on the Food Network float), and this year, Barneys’ windows. And I got to meet Simon Doonan (Barneys’ creative director and windows master). He’s a hoot, I love him.

To be included with the group of women (in the window), I felt really honored.

Up next: Burrell’s recipe for braised short ribs >>