‘Like, yo, dude…you’re just so gnarly man, like unbelievably rad in the kitchen.’ That was pretty much the gist of Guy Fieri’s “Big Bite” this week with none other than his Texas “bro,” Matthew McConaughey as his guest. Since when did Fieri have reputable guests on his show? That made me laugh, we all know McConaughey isn’t reputable by any stretch of the imagination. 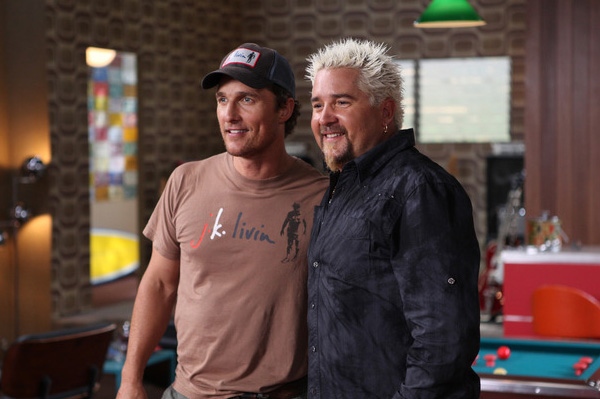 I have to admit, McConaughey looks like he knows his way around the kitchen, which makes him even more annoying. His handling of a knife when dicing an onion looked pretty impressive, perhaps he learned a few skills in one of his Oscar nominated movies.

It appears that these two boys go way back. Fieri prepared a dish that he made for McConaughey at his Malibu home, a rather tasty looking oyster Rockefeller-inspired dish made with potato sticks, which the Food Network naturally called, “Matthew’s Malibu Oysters.”

I’m going to pay for this, but I learned something from McConaughey, he knows how to make a drink. He introduced me to Ting, a Caribbean grapefruit extract that he throws in a glass of dark rum with a dash of lime and ice. Not sure if Ting can be bought in the continental U.S., but if it is, I can be reached at….

McConaughey describes how his “lady Camila” is Brazilian and her mother has a strong influence on his cooking. Still, he says he has a pantry full of Brazilian spices that he has no idea what to do with, so perhaps he’s not that versed in the kitchen.

He also goes on to describe a story about how his son, Levi, knows the origins of all the fruit in his orchard: avocadoes from Mexico, loquats from China…I have no idea either.

McConaughey also talked about his J.K. Livin Foundation, providing a few touching moments among the bling, pinball playing, drum beating, and rum making. (“Just Keep Livin'” is a motto he developed after his father died in 1992.) The jklivin.com website is dedicated to helping teenage kids lead active lives and make healthy choices.

So there we have it, folks, not only is Matthew McConaughey a fine looking actor, he also knows his way around a kitchen, just makes you want to take him home doesn’t it?