Cookbook author Denise Vivaldo claims that she ghost-authored dozens of recipes for Food Network star Sandra Lee. What famous disaster was she responsible for creating? 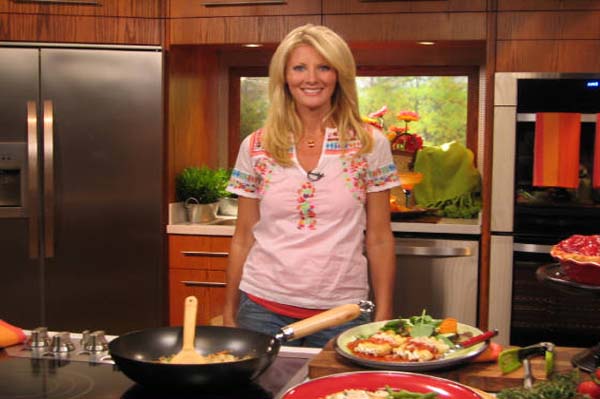 Are some of today’s most recognized chefs just wolves in sheep’s clothing? If the allegations are true, then yes.

One relatively-unknown recipe author claims she’s the person who created Sandra Lee’s Kwanzaa and Hanukkah cake, according to her confession on The Huffington Post.

“I wrote and sold the recipe for the Kwanzaa cake to Sandra Lee and, while I’m confessing my soul, yes … the Chanukah cake, too,” Denise Vivaldo said.

Vivaldo goes on to explain that celebrities contract with her to write their world-famous recipes, despite her own status as a cookbook co-author and recipe consultant.

“Many celebrities or TV chefs hire me because they are too busy to write their own recipes. This is not unusual.”

Color us shocked, though we probably shouldn’t be.

Vivaldo has ghost-authored cookbooks and recipes for numerous celebrity chefs and bakers.

“At least twenty of the fifty cookbooks I’ve ghostwritten or contributed to have ended up on the New York Times Best-Seller List,” she wrote.

And that Kwanzaa cake disaster? Well, Vivaldo is to blame — she created it.

“I can honestly say Ms. Lee had nothing against African Americans or Jews. She just has incredibly bad food taste. She was not discriminating about who would be harmed from her culinary “creations.””

Vivaldo said her relationship with Lee started 10 years ago with a phone call to help on her self-published series of cookbooks.

“One night in my office, at least 10 years ago, my phone rang. I answered it. If only I had noticed that my dogs started to howl and blood mysteriously started seeping from the walls. Alas, I did not. So excited to close the sale, I made an appointment with a personal assistant to meet “the next Martha Stewart, only bigger.” I was happy to think about this latest project that would help feed my assistants.”

The food celeb-in-training wanted to create a cookbook with no fresh ingredients.

“No fresh food. Just canned food. Nothing fresh, do you understand me? All food out of cans or boxes, so it’s easy for the homemaker …and write the brand name of the cans or boxes right in the recipe,” Lee told Vivaldo.

“Ms. Lee called and though we were done with the book, she needed at least ten extra angel food cakes for “fun” sugary holiday times to sell to a magazine. Just a reader’s note, it wasn’t Gourmet, but the magazine I designed those “adorable cakes” for is still in business.”

She doesn’t take credit for one part of the Kwanzaa cake though.

“Please ask yourself, what would you have done in my place? See how that Kwanzaa cake is looking better from my perspective? I will tell you truly, the candles were her idea,” she claimed.

“I guess I imagined something more refined. And I know the Corn Nuts were disgusting, but she didn’t. As a matter of fact, the more tasteless the recipes got the more she liked them, the faster she approved them, and I could get home and drink some medium-priced wine after our meetings. She’s not a good role model for abstinence.”

This is all so enlightening — yet disappointing at the same time. Is nothing real? Does Rachael Ray write her own recipes? Is Jamie Oliver actually a Naked Chef, or just Naked?

Guess the food business is more about entertainment and less about food. Now we don’t feel so bad about our own culinary shortcomings.

What do you think about Denise Vivaldo’s revelations?

More on food and recipes