“Top Chef” returns, bringing back previous contestants with their new, sleek, black chef coats and pouting faces for an ultimate showdown of mastery in the kitchen with “Top Chef All-Stars.” The folks over at Bravo have overhauled “Top Chef” to bring you a more refined and sophisticated look. Padma Lakshmi is still the host, but alongside Tom Colicchio at the judges’ table, is none other than Anthony Bourdain, who is sure to bring in some bleeping sharp criticism throughout the season. 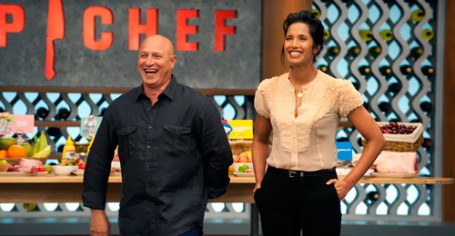 In the Top Chef All-Stars first episode, we are quickly reminded of the quirks from Season 1’s Stephen Asprinio and Season 2’s Marcel Vigneron. How can we not remember these guys? You know the producers are going to keep them around for as long as humanly possible.

For the Quickfire Challenge, the chefs teamed up with their respective past season’s castmates and were tasked with making a dish that best reflected the city in which they starred: Miami’s Season 3 team made a pork tenderloin; Season 4 was Chicago with pork sausage and mustard ice cream; and Season 6 was Las Vegas, represented with a bucatini, bacon, and lobster dish.

Tom Colicchio judged the Quickfire for the first episode and chose Chicago. He said that they “clearly presented their city very well…had a ton of flavor.”

Mike Isabella of Season 6 appeared a little annoyed and said, “So they did a sausage with mustard, big whoop,” but, yeah—Richard, Spike, Dale, and Antonia each had immunity—so that kind of was a big whoop. Don’t be a hater.

For the Elimination Challenge, held at New York’s Russian Tea Room, each chef was presented with the ingredients that had previously sent them packing.

Using those ingredients, they had to recreate an improved version of their original dish. Holy cow, what an amazing challenge! But it sucked for Stephen Asprinio, he never even made the dish for which he was originally eliminated; he was at the front of the house serving wine during that challenge. Dang!

After the chefs were split into two groups of nine, each group got to taste the other group’s dishes. Not only that, but there was a television in the kitchen streaming the critiques from the rival group as well as from the judges, how painful was that?

The top four were Spike Mendelsohn, Richard Blais, Angelo Sosa, and Jamie Lauren. However, clearly the producers learned from Season 6’s “pea-gate,” Tom sent Blais back to the stew room as he ran over cook time. The first winner of All-Stars was Sosa and his dish of pork belly with watermelon.

For the bottom three we had Fabio Viviani, Elia Aboumrad, and Stephen Asprinio.

I want to focus on Viviani. He yelled at Bourdain, saying, “[my food] is peasant food, not meant to be fine dining,” and Bordain replied, “…that dish, I hated it so much…I hated the whole dish, I kept poking it to make sure that I actually hated it as much as I think I do. I really, really, really hate it, it looks like an inside out animal, it’s appalling.” One would imagine those words would end your “Top Chef” career, but no, Aboumrad went packing.

Little elves over at Bravo, take heed, we as viewers don’t appreciate being played. Yes, Fabio may be a ratings puller, but really, should he have won? If yes, then fire your editor and let us see what really happened. I have to watch you because I write about you, but don’t do it again.

Despite my grievance, there are two points we should take away from “Top Chef All-Stars.” The first point is that these guys are amazing chefs; the second and most important point is that they are incredibly competitive and harbor intense bitterness for one another, which is going to make one hell of a season.