Wendy’s unveiled a new recipe for their famous French fries. What makes these fries different and will they catch on with the masses? 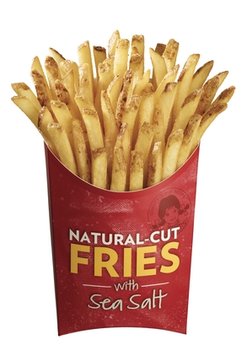 Great! It’s another thing we can dip into our Frosty’s. Oh, shush — you know you do it too.

Wendy’s announcement is a part of their campaign to introduce more “real” ingredients on their menu. The first part of the transition was the introduction of their new line of salads.

“We want every ingredient to be a simple ingredient, to be one you can pronounce and one your grandmother would recognize in her pantry,” said Wendy’s Chief Marketing Officer Ken Calwell.

The new Wendy’s fries will be thinner and made of Russet potatoes with the skins left on. Then, they’re throwing sea salt on the top to give the fries a flavor explosion.

The introduction of sea salt will considerably up the sodium count on the new Wendy’s fries — 500 mg of Sodium on a medium-sized fry, compared to 350 mg with the old recipe. A medium fry will contain 420 calories, up from 410. Prices will remain the same.

The fries are set to hit stores Thursday.

Weigh in: Are you excited by this change, or is it just another marketing ploy?