Cupcakes are out, New Jersey is in. Apparently these days it’s all about the Garden State, which is epitomized by TLC’s “Cake Boss” and MTV’s “Jersey Shore.” This week, in the simple world of crossover reality television, Buddy Valastro met his match in fist-pumping Nicole “Snooki” Polizzi. Of course, we know that this is simple publicity: Season Two of “Jersey Shore” ended and Snooki needs to keep herself relevant, even on TLC. 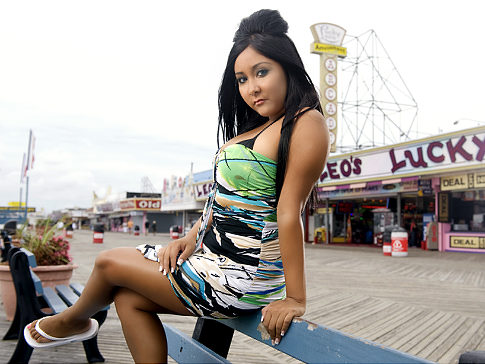 In all seriousness, Snooki was very sweet; she wanted Buddy to make Momma Polizzi a birthday cake. Not to be upstaged by her own mother, however, Snooki wanted herself represented in the cake with ‘fist-pumping gorillas, GTL [gym, tanning, laundry], and poufs’—I have no idea, either.

Before Snooki even got a chance to meet with Buddy, his cousin, Anthony, embarrassed the Valastro family when he hit on Snooki (who am I kidding? The family was embarrassed a long time ago when he decided to put on those emerald green earrings!). Snooki’s only response was, “Do you go tanning?” And, as any Jersey native would do, Anthony hung his head in shame. But then Anthony, never the defeatist, called on the styling assistance of a couple of the bakery girls for a makeover.

This is about food, right?

What can be said about the Snooki cake? It was a schizophrenic mess. On one side of the cake was an over-tanned, pouf laden Snooki dancing on the shore with her “gorillas,” and on the other side, a delicate flower arrangement with her mom in the garden. Yes. Really.

Let us just be thankful that these kind of episodes happen only once in a blue moon. Somewhere there is a producer clutching a bottle of gin, drinking away his career. Maybe he should get himself a “gym, tan and laundry.”