Spaghetti tacos, first featured on the popular kids show iCarly is taking the tween world by storm. What are spaghetti tacos and how can you make them for your family? 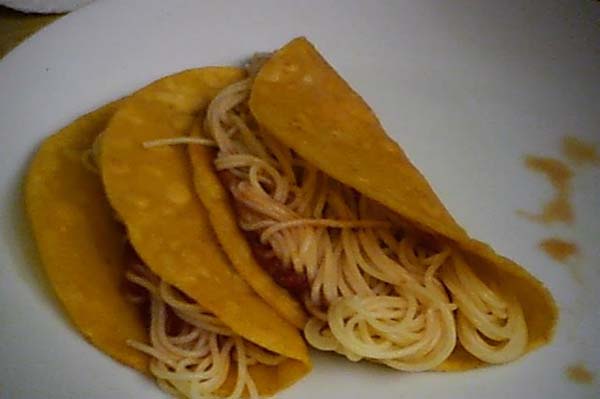 Spaghetti tacos, an odd culinary concoction created on the popular Nickelodeon show iCarly, is becoming a sought-after treat by tweens and teens around the country.

On the episode, Carly’s offbeat older brother, Spencer, creates spaghetti tacos for one of the show’s characters. The un-appetizing treat quickly caught on with iCarly fans, leaving their parents scratching their heads.

“I thought he was joking,” Brooklyn, N.Y. mother Jennifer Burns told The New York Times about her son’s spaghetti tacos request. “But then he kept asking.”

In response, many mommy bloggers and other foodies have been developing their own spaghetti taco recipes to placate parents desperate to make the meal for their young fans. Kids are swearing by the craze, saying that the creations actually taste really, really good.

Whether or not the craze sticks around isn’t yet known, but one thing’s for sure — spaghetti tacos now make it possible to get your Italian food fix on the go.

“Spaghetti tacos has made it possible to eat spaghetti in your car,” Syracuse University professor Robert Thompson told The Times. “It’s a very important technological development. You don’t even need a plate.”

We’re not convinced — yet. But, never fear! We’ve got you covered for when your kids start begging you to make the iCarly spaghetti tacos.

(via The Pioneer Woman)

15 hrs ago
by Kenzie Mastroe