There is one thing I can do well and that is watch television…come to think of it, there are many things I can do well, but we don’t need to go there quite yet, our friendship is still fresh.

What I can’t do well is talk sports around the water cooler. While living in England, soccer wasn’t something I could discuss intelligently—and having lived in the U.S. for more than seven years now, I think I’ve “watched” all of seven football games. These were in the form of Super Bowl Sunday—and what does any food obsessed person do on Super Bowl Sunday? Cook. 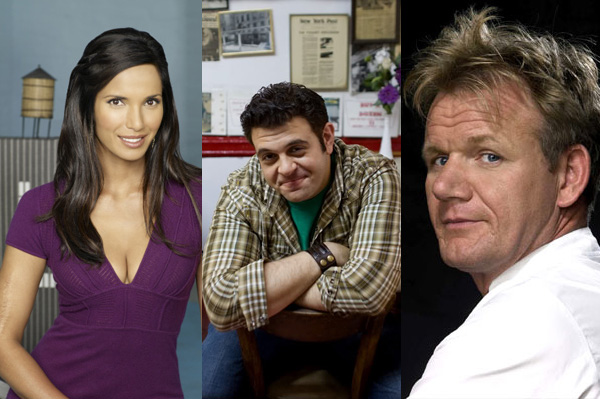 Let’s get back to that television thing, I love all things food and all things TV, wasting away a Sunday afternoon with my DVR—dissecting, critiquing and judging food shows in particular.

Having an obsession with both, it stands to reason that reality food shows are a slight addiction of mine. Who doesn’t love watching our favorite chef cook up a storm—from Ramsay and his obscene mouth, to Duff of Charm City Cakes and his infectious laugh, to Padma’s fashion faux pas, you know she has them, more than we care to see. Let’s create our own water cooler moment, a place for us to come together and talk food reality television.

A word of advice, despite this column coming to you two weeks into Season 3 of Food Network’s, “The Next Iron Chef” and three weeks into Bravo’s latest “Top Chef” franchise,  “Just Desserts” (two personal favorites of mine), these are just two shows that will be touched on as we judge them—couch potato style. If you’re not already watching these two shows, you’d better set your DVR now.

Come to think of it, once you’ve finished reading this, head to your television and set your recorder to anything food reality related on Fox, Food Network, Travel Channel, TLC and any other channel you can think of—it will make this relationship of ours easier.

I want to take a moment to talk about “The Next Iron Chef,” hosted this year by Season 1 winner, Iron Chef Michael Symon. I try and pay extra attention to this show’s contestants because one of these guys or gals are going to stick around on the Food Network, not just as a future Iron Chef, but they also will make numerous appearances across the network and will eventually have their own show. My bet is on Duskie Estes, as much as I love Cat Cora, she really needs a female counterpart on “Iron Chef America,” and Duskie Estes might just be that person.

The final word I have for this first encounter, which might give you a taste of how things will be, is “Top Chef’s” “Just Desserts’s” contestant, Seth. Let’s all say this together—”Crazy!” If there is one reason to watch this show it is that all these characters are amazingly dysfunctional, the way I remember “Top Chef” used to be. Oh, how I miss Tiffani from TC’s Season 1.

So, I invite you to join me each week as we create our own water cooler moment, we’ll remote surf the networks in search of the best reality food television moments. From now until next week, be sure to eat, judge, and comment.

9 mins ago
by Justina Huddleston