Restaurateur and The Next Iron Chef judge Donatella Arpaia is left-handed, which doesn’t seem like such a big deal now, but growing up, when she wanted to help in the kitchen, everything she did looked backwards and a little off to her Italian mother. So, Arpaia was given lesser tasks, such as sorting through tomatoes and picking out the rotten ones that wouldn’t make it into batches of pasta sauce. 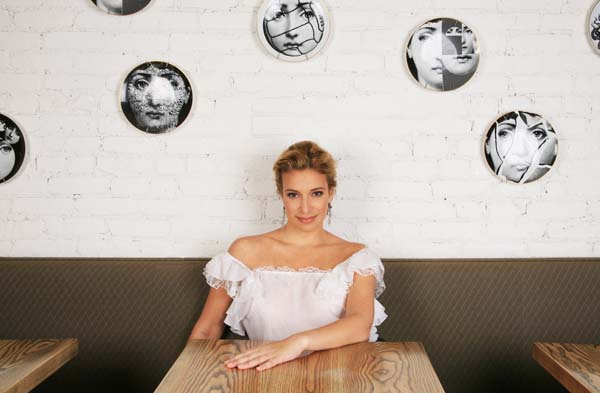 “I wanted to do all of the fun stuff, but she wouldn’t let me,” Arpaia says. Turns out, it wasn’t much of a setback. The New York restaurateur is known for coming up with eateries that are as polished as she is—she’s opened nine since 1998. She’s also a judge on “The Next Iron Chef” on the Food Network, whose third season begins Sunday.

During summer trips to Italy, Arpaia learned to cook with her mother, aunts, and great aunts in the Puglia region (in the heel of Italy’s boot shape), where her family still has farmland.

Today, her restaurants include Mia Dona and Kefi in New York City and Eos in Miami—and her newest restaurant, Donatella, in Manhattan, where Neapolitan pizzas crisp up in a wood-fired oven built by hand with materials imported from Naples, Italy. (Lest things get too rustic, the giant oven was covered in shiny gold tile.)

The Donatella empire also includes a cookbook, “Donatella Cooks: Simple Food Made Glamorous,” a line of jarred pasta sauces, and, eventually, her own television show. Here, she sounds off on cooking at home, her love of fashion, and the inevitable weight gain that comes with judging “The Next Iron Chef.”

Question: You’ve been a judge on all three seasons of “The Next Iron Chef.” How would you do as a contestant on the show?

Donatella Arpaia: The million dollar question! I know what it’s like to be in (the contestants’s) shoes. I think I would do okay, but I don’t want to find out any time soon. (To be on the show) you have to be an amazing chef, but you can be an amazing chef and not be an Iron Chef.

Q: The judging process—from tasting to deliberation—seems to happen so quickly on air. What’s it really like?

Donatella Arpaia: It’s edited down to sound bites and a three-minute judging process, but it’s often hours. We take it very, very seriously because these chefs have worked so hard to earn a spot and they want it more than anything. I can’t be whimsical about it. The audience should realize that there’s a lot that goes in to it.

Q: Can you give us a behind the scenes glimpse of the show? What doesn’t show up on camera?

Donatella Arpaia: It’s really hard to stare at the chefs when they’re getting eliminated for hours. They want to see who’s going to go home (by reading the judges’s faces). I keep my eyes down because they try to engage me; that’s the hardest part about the show.

They keep us separated (from the contestants) and we’re not allowed to talk to them or say hello to them. If you happen to be in the makeup room together, you have to leave.

We as judges don’t see them cooking. I think it was smart choice because … I shouldn’t have an emotional attachment.

>>>Up next: What’s so special about Neapolitan pizza?