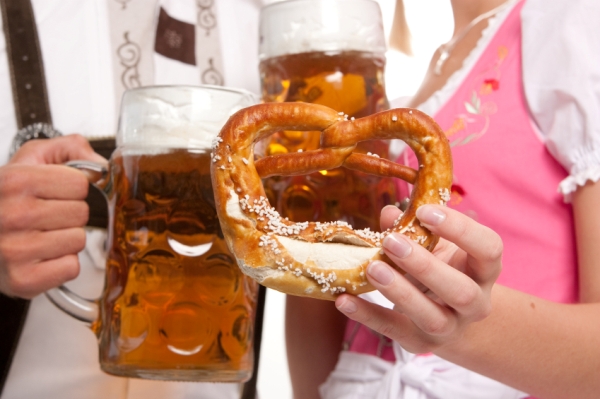 First brewed in 1872, Spaten Oktoberfest is the ultimate Oktoberfest beer because it is the original. This German brewed beer is simple and classic and is pretty much the perfect beer to enjoy on a crisp October day. Typically available August through October, Spaten is a golden amber color with a medium body and a good balance of hops. A slightly rich beer with a hint of sweetness, it’s served best with German-inspired cuisine like bratwurst, sausage, or anything grilled.

Taking a note from traditional Oktoberfest beers, the brewers at Brooklyn Brewery, have created a classic style beer with their own original flavors. With a fuller body than most typical Oktoberfest versions, this beer is fairly malty and has just a hint of bitterness and caramel. Brooklyn’s version is also crisp, nicely carbonated, and it is very drinkable. Enjoy it August through October with steak and other meats.

A nice dark mahogany color, Flying Dog Brewery’s Dogtoberfest, is an authentic German beer brewed with 100 percent imported German malts and hops. Brewed with Munich in mind, this beer has a slightly sweet taste with a crisp finish and a full, round body. Pair this brew with poultry, sausage, and pork, and enjoy it throughout fall’s crisp days and evenings.

Bell’s Oktoberfest beer is the most refreshing yet with a surprisingly lighter feel than most others. With hints of brown sugar, caramel, and toasty malts, this beer has a good, medium body and pours perfectly into a pint glass from the bottle. Usually available from September 1 through the end of October, this beer pairs well with roasted meats, poultry, and shellfish.

Summit Brewing’s Oktoberfest beer honors the true spirit of Oktoberfest and is perfect for a fun and festive fall celebration. With its reddish hue, smooth finish, and cinnamon and spice flavors, Summit embodies what Oktoberfest is all about. This brew is very easy to drink and is a great standby as a tasty Oktoberfest beer.

20 mins ago
by Kristine Cannon

43 mins ago
by Justina Huddleston