A Massachusetts company wants to bring genetically modified salmon to seafood counters around the United States. Will it be as tasty as regular salmon?

You might get to make that choice on your next dinner date if a Massachusetts company gets its way. AquaBounty, a “biotechnology company dedicated to the improvement of productivity in aquaculture,” hopes to bring genetically engineered Atlantic Salmon to a table near you if the Food and Drug Administration gives them the green light. 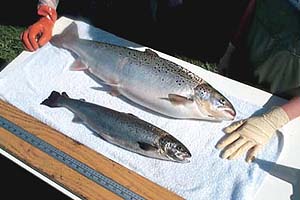 The engineered seafood grows at twice the rate of “regular” salmon and provides the same nutritional benefits, making dishes like Honey-Soy Broiled Salmon and Grilled Blackened Salmon with Mango BBQ Sauce even more scrumptious than they are now.

Critics complain that the “frankenfish” might deplete the natural salmon population. Despite the concerns, the FDA is expected to give AquaBounty the thumbs up after meetings this week.

Time will tell if the genetically engineered fish will catch on with consumers. One thing’s for sure: we’re already planning our meals with the help of some of the delicious SheKnows salmon recipes. Take a peek and you’re sure to find a salmon dish that will please every member of your family, even the picky ones.