Last week, I was in the halls of Lincoln Center for New York Fashion Week (NYFW) pretty much around the clock. I gave up sleep, proper grooming (ironically), and, yes, regular meals. But here are a few of the delicious food highlights from this year’s New York Fashion Week. See, fashion-istas eat too! 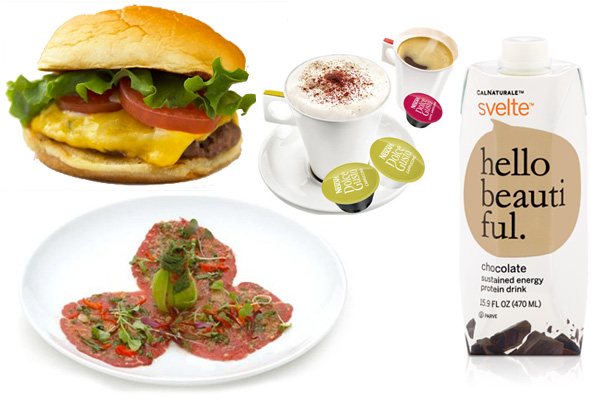 I think of it almost along the lines of battle scene survival: When you don’t know where your next meal is coming from, it suddenly becomes more acceptable to eat foods you’d normally consider unacceptable. Food is fuel, after all, and this is a time and place where you can use all the energy you can get.

Popchips® and Starbucks’ Frappuccinos® were sponsors in the lounges, so freebies of these items were copious, but were those going to keep us upright? Probably not.

A lesson I learned several seasons ago is that hydration is the most important part of the game—you’ll always find free caffeine and an open bar at NYFW but, without water and vitamins, this stuff will have you flat on your face in no time. For those who have never been there, this is no exaggeration—you truly will find open bars first thing in the morning, but often not so much as a block of cheese to go with them.

Sometimes, though, events do have food—especially the more fabulous after parties. Be forewarned, however, that whatever you have at these events will be flimsy enough to fit on a cocktail napkin and will never involve a fork.

Still, there were some standout stars. So, based on this, I shall share the only meals I ate—and enjoyed—throughout the eight long days of Fashion Week.

During the festivities of Fashion’s Night Out, stores throughout the world opened their doors and offered entertainment and libations galore in an attempt to woo shoppers. I was most woo’d by the Tory Burch store in the Meatpacking District—Shake Shack catered it! That’s right, New York City’s most famous burger—free, no line, just for going shopping!

Celebrity stylist to the stars, Robert Verdi, hosts a luxe media lounge each season for editors to stop by and recharge between events. This year he had both Dolce Gusto coffee (so good I chose it over cocktails!) and BluePrint Cleanse’s amazing marinated kale and tahini dressing salad. At this point, a scant three days in, my soul was already craving—and tremendously grateful for—these wholesomely delicious veggies.

It was a very full day of events and runways with one epic highlight—the Diane von Furstenberg live stream runway and after party—where, yes, I met the woman herself! Indochine catered the event, where nothing I ate involved a fork and everything was eaten off of a cocktail napkin—but seriously, when such small bites include unlimited Asian crab cakes and filet mignon carpaccio, there is no bad.

The final stretch of four days began and it was a rough haul. If not for one business dinner that fell on those days, I would not have picked up a fork for the rest of the week. However, it was during this time that I literally lived on CalNaturale’s Svelte protein drink—I chilled it overnight, and packed it in my bag as I left pre-dawn each morning—and even as all my friends grew weaker around me, I stayed strong!

Four days later, Fashion Week ended at last! Just in time for me to take off my stilettos and go visit my parents for Yom Kippur; a time when we reflect, atone, and fast. Oh well, Fashion Week gave me good practice!