Want to bring a taste of autumn to your table? Nothing says fall quite like allspice, cinnamon, cloves, ginger, and nutmeg. From baked goods to savory dishes, spice up your cooking routine by taking a cue from these fall spices. 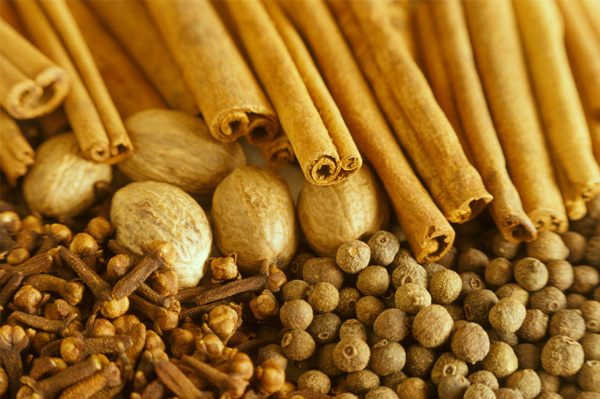 Contrary to popular belief, allspice is not a mixture of spices; it’s a berry from a tropical evergreen tree. Also known as Jamaican pepper, this Caribbean fruit resembles a peppercorn and has a sweet and spicy flavor. It’s used heavily in island cuisine and baked goods. Suggested pairings: Apples, carrots, lamb, peas, poultry, cabbage, or winter squash.

>>Click here for a Rhubarb Pie rcipe with allspice

Cinnamon has been used to enhance sweet and savory dishes throughout the ages. It comes from the inner bark of a tropical evergreen tree and is sold either ground or rolled tightly in a stick. This do-it-all spice works equally well when added to baked goods or spicy fall stews. Suggested Pairings: Apples, pears, bananas, pork, beef, pumpkins, sweet potatoes, and chocolate.

While many people are under the assumption that ginger is a root, it’s actually a rhizome. It’s the requisite spice for ginger snaps, gingerbread cake, and ginger ale, but it also works great in Chinese dishes. Suggested pairings: Avocados, ham, pork, rice, seafood, carrots, peaches, and cabbage.

>>>Click here for a Carrot and Ginger salad recipe

Nutmeg is the seed of a fruit that grows on a tropical evergreen tree. This autumnal spice lends an air of fall to whatever it seasons. Suggested pairings: Carrots, cheese, mushrooms, chocolate, parsnips, spinach, sweet potatoes, and turkey.

Ready to try your hand at using fall’s best spices? Read on for the ultimate spice cake recipe! >>