One-third of the Eat Pray Love experience on screen and on the page of Elizabeth Gilbert’s Oprah-adored memoir is captured by the acting talents of star Julia Roberts and her international Rome-based co-stars. Part of the magic of the Rome shoot was due to Susan Spungen’s role as food coordinator.

Eat Pray Love is merely another spoke in the cinematic wheel of Susan Spungen. Her cinematic culinary talents have been showcased in Julie and Julia, It’s Complicated and now, finally in a film that has the word “eat” in the title — Eat Pray Love. 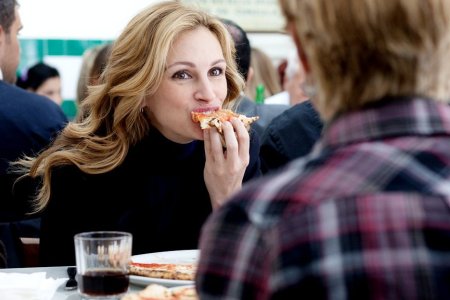 Spungen provided us with a recipe or two to bring the Eat Pray Love experience home when she sat down with SheKnows exclusively. The woman who made the eat in Eat Pray Love come to life shares on set secrets including having to feed Julia Roberts plate after plate of pasta, pizza and the richest food in the world. Don’t worry, Roberts was more than game as the return to a celebration of food was central to Elizabeth Gilbert’s global journey of self-discovery.

Eat Pray Love: Behind the food

SheKnows: What was the biggest challenge for you as the food coordinator for Eat Pray Love?

Susan Spungen: The biggest challenge for me was really working in a foreign country — without having a home base. On Julie and Julia we were working on a soundstage that had a kitchen. We had stoves. We had refrigeration and everything is right there. You leave work and come back to the same place the next day. In Eat Pray Love, the shoot itself was an adventure [laughs], just like the book was and we were flying by the seat of our pants. Every day we were in a different location. The challenges of preparing and cooking food, when you don’t know what you’re walking into, were honestly the biggest challenges. It was the logistical ones.

SheKnows: Was living and working in Italy completely and utterly professionally and personally satisfying?

Susan Spungen: It was great. I love Italian food. It’s kind of in my blood even though I’m not Italian. Somehow, I think I’m an honorary Italian. It’s the cuisine I identify most closely with and the one I cook the most naturally. It was great to have total immersion in the culture. For me, going to markets is something I always do when I arrive in a new place, even on vacation, just to see what the people are like and it’s really the crossroads of any community. You can see what the food is really like and all the ingredients. For this shoot, I was doing that almost every day, going to the market. For me, that allowed me to feel like an Italian for a little while. I was never a student in Rome, yet I was there for three weeks. I never had that experience to feel like I was living there.

SheKnows: What was one of your favorite dishes you had to craft for Eat Pray Love? 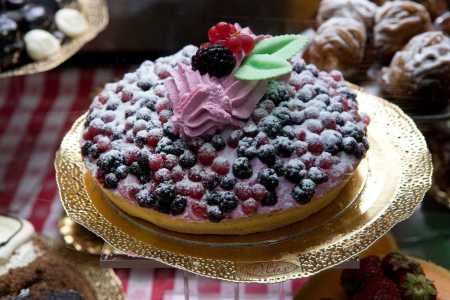 Susan Spungen: There’s nothing wrong with a fried squash blossom. That’s a treat that you only get once a year. Julia loved those! But, really, who doesn’t love pasta, right? You can’t go wrong. All of the pasta dishes were incredible.

SheKnows: There’s a great scene where Julia is sitting down to a plate of pasta and there are close-ups on her eating the food, twirling the fork. As a food coordinator and getting literally that kind of close-up on your work, what does that feel like?

Susan Spungen: It’s great. There are a lot of food close-ups in this movie, which for me is gratifying because I know it’s so easy to miss the food in movies. I love those close-ups on the food! I know doing the other two films that I’ve done, those are the moments that people really remember. It makes an impact when there are close-ups. I’m always [laughs] happy when there are close-ups. Something happened when we were shooting that scene and they told me they were done with the pasta. But, then they wanted another plate for close-ups and we were trying to cook another batch of pasta in time. Midway through, they said they didn’t have time to wait for the pasta to boil. They had to move on to another location. It was touch and go, but it sounds like the shot came out anyways.

SheKnows: It sure did and boy did it look delicious. Julia didn’t have to act too much to enjoy that plate!

SheKnows: Did you go to the book Eat Pray Love to see what was she was eating?

Susan Spungen: There were some specifics in the book and they took some of those and put them in the script. When Julia is ordering for the entire table in Rome, those foods are in the script because it is where she is practicing her Italian. I’m not sure that was in the book, but the menu was right out of the script. 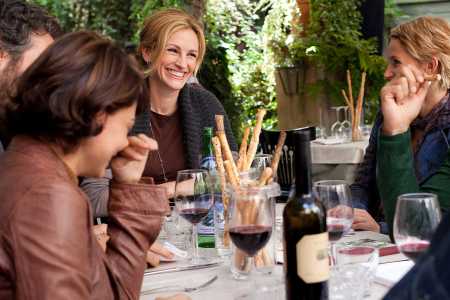 SheKnows: What also struck me is amidst all this Italian food heaven, there’s the scene where Julia cooks a Thanksgiving meal for her Italian friends. Was that a little surreal making Thanksgiving dinner in Rome?

Susan Spungen: [Laughs] A little bit, I just was channeling. I thought, “If I was Elizabeth Gilbert and I was in Rome, what would I cook?” What would an American in Italy cook for Thanksgiving? I combined American Thanksgiving traditions with Italian influences. That food was not scripted except for the stuffing. I got to have some fun with that. I don’t know if you actually get to see the food in that scene.

Susan Spungen: Oh good! I tried to imagine what people would cook. One thing I found was many of the difficult to find ingredients, sometimes they’re even hard to find here out of season. Apparently there’s a demand in Rome, so there are Butterball turkeys and cranberry sauce at Thanksgiving time, but not in August [laughs]. One of our production managers had actually lived in Italy and he knew a place where you could get cranberry sauce and a turkey. He hooked me up.

Susan Spungen: No films on the horizon right now, but I am finishing up a cookbook.

SheKnows: We look forward to it!