Imagine that a bunch of your favorite chefs got together and opened a store – not a restaurant – to sell their most famous specialties. The Pop Up General Store in Oakland brings chefs and customers together every few weeks to meet and buy specialty foods that were once available only in restaurants. If the Pop Up General Store concept takes off elsewhere, it could be a whole new way to shop for incredible food and help incubate small, fledgling food businesses. 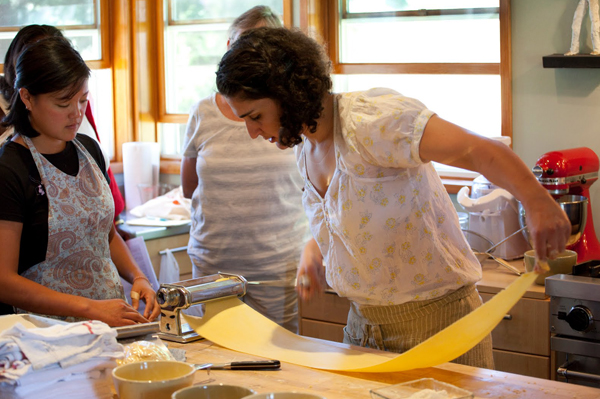 For one night every few weeks, chefs and other high-end food makers gather here to hawk prepared fare to foodies eager to pay top dollar for specialties that have celebrity status in the Bay Area, from sausage and pasta to English muffins and gyoza.

Most of the vendors have ties to the iconic California restaurant Chez Panisse, which started the seasonal, farm-to-table dining trend.

The idea behind the Pop-Up General Store, says co-organizer and Chez Panisse alum Samin Nosrat, is to bring restaurant-quality food into home kitchens and to incubate select food businesses. “We’re sort of inviting our friends to make their specialties,” she says.

The most recent market in mid-July featured 18 vendors and drew about 500 customers. It happens in a renovated streetcar depot, now a catering kitchen.

Nosrat makes sausage ($14 per pound, or about four to five sausages), bronze-cut pasta ($12 per pound) and heirloom tomato sauce ($13 per quart) to be taken home and cooked within a few days. Another draw is gyoza ($12 per dozen) made by Sylvan Mishima Brackett, a former personal assistant to Alice Waters, the owner of Chez Panisse.

The artisanal food can seem expensive, but Nosrat says customers are getting a fair price for the handmade, hand-packaged, high-quality food. The goods are priced to cover the cost of ingredients and labor, Nosrat says, and most of the vendors aren’t making a profit yet.

a passion for quality

Nosrat and the market’s co-organizer, Christopher Lee, met while working at Chez Panisse. Lee went on to open his own Berkeley restaurant, Eccolo; Nosrat followed and eventually ran the kitchen.

When Eccolo closed last August, Nosrat and Lee were at a crossroads – not wanting to open another restaurant, but wanting to continue supplying customers with favorite dishes from the restaurant.

“It was so exhilarating for us to understand that we could still cook for people who appreciated it,” Nosrat says.

The market has opened about a dozen times since, and Nosrat now describes the scene as a “mosh pit” where items sell out before the market’s two hours are up.

“I spent three days having two cooks make pasta. It was gone in 45 minutes,” she says of the mid-July market.

Nosrat, who also teaches cooking classes and is a freelance food writer, would like to expand the Pop-Up General Store eventually. She says she’s not in a rush to add vendors, though, because quality is more important than quantity.

“Everyone is someone I can really stand behind,” Nosrat says. “Whether or not they worked at Chez Panisse, we all come from an understanding of quality.”