Backyard barbecues summon thoughts of hanging out around the grill and sipping suds from a can. But if you’re looking for a better way to beat the BBQ blues, we’ve got your number! Here are some ways to bring your next BBQ bash up a notch. 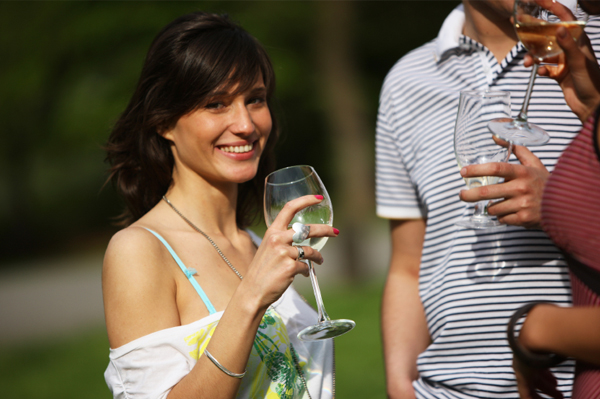 Smoke ’em if you’ve got ’em

Hot dogs and hamburgs for a BBQ can be a ho-hum offering. Instead, switch them up with true barbecued smoked meats. Many people refer to grilling as barbecue, but in fact, barbecue — or “BBQ” — refers to meats cooked low and slow, often on a barbecue smoker, versus hot and fast on a grill. You can buy a standard-model smoker at Wal-Mart or Home Depot for $100 to $200. Competitive barbecuer Sterling Smith of Loot N’ Booty BBQ says, “Google barbecue information plus your state to find a local barbecue forum where experts share tips, pointers and recipes.”

Class up the cocktails

You don’t have to serve canned beer out of a cooler. Instead, serve a signature cocktail that everyone can enjoy. It’s best to prepare the beverage of choice in advance, then set out a pitcher, galvanized bucket of ice, tongs and glasses — and let party guests serve themselves. Remember that not everyone will be imbibing in alcohol, so mix up a virgin version as well; just don’t forget to label it properly!

While many of us view Memorial Day as a three-day pass to party and a kick-off to the summer season, remember that the real meaning behind Memorial Day is just that: Remembrance. In 1868, General John Logan deemed May 5 Decoration Day, whereupon he ordered flowers to be placed on the tombs of both Union and Confederate soldiers. Since WWI, Memorial Day has been celebrated on the last Monday of the month. If someone special in your life sacrificed his or her life in the name of military service for our country, don’t forget to recognize that person on this day.

If you’re grilling in the backyard, temperatures have probably warmed up enough to go poolside with your party. Set up chairs and loungers by the pool. Throw in some rafts and swim noodles, along with a festive beach ball or two.

For those who are not swimsuit ready, provide some landlubber games such as horseshoes, volleyball and croquette. For the kids (and kids at heart), pick up some jump ropes, hula hoops and bubble blowers.