Lovely anise-flavored fennel is a tasty vegetable that is in season now through early spring. This distinctly-flavored crunchy bulb is a star in Mediterranean-style dishes and is uniquely delish as a side dish or as a garnish on soups, sandwiches or salads. Here are a few fabulous tips and recipes for fennel. 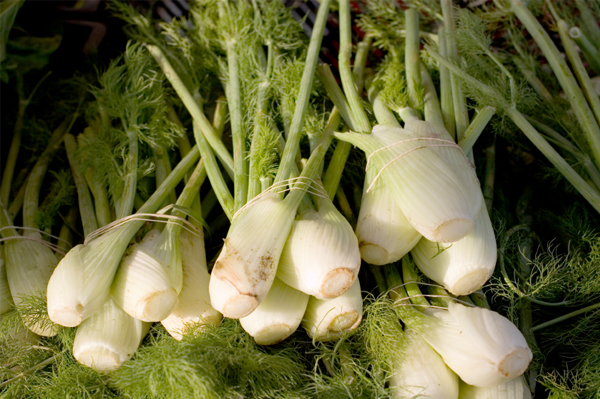 When you see fennel in the grocery store or at your farmer’s market, it will be a large white or light green bulb extending into crisp green stalks with feathery leaves on top. The bulb, stalks and leaves are all edible and each part can be used in a different way.

When purchasing fennel, the first thing to look for is a whole bulb that has no cracks, splits, large nicks, browning, or soft spots. It should be firm and white or light green in color. The stalks should be coming fairly straight up from the bulb and close to each other with leaves that are feathery with no budding flowers or obvious wilting or browning. Give the bulb a sniff, it should have a nice anise smell.

When you get the fennel home, simply store it in the crisper drawer in the refrigerator. To prevent molding, don’t wash fennel until you are ready to use it. Use fennel within 3 to 4 days for best freshness and flavor.

To prepare fennel for cooking, first rinse it well, especially between the stalks where dirt and sand can get stuck. How you cut the fennel will depend on how you plan to cook the fennel. Typically, you will always cut the stalks off of the bulb and cut out the tough inner core of the bulb. At this point, you can slice the bulb vertically or dice it. The stalks can also be sliced or diced. The feathery tops are best if used fresh in salads or as garnish.

Fennel is quite versatile and can be cooked in a variety of ways. The bulb and stalks can be sauteed in olive oil and lightly seasoned for a side or as a component for a chicken, beef, pork or seafood dish. The fennel stalks can be cooked in soups and stews, or they can be used raw in salads and slaws. Fennel also goes well in pasta or risotto. The feathery leaves are a perfect garnish for soups, salads or just about any dish that needs an extra bit of flavor. One of the best pairings for fennel is salmon – try braised fennel topped with pan seared salmon, or bake salmon with a fennel crust.