As energy costs increase, and concerns about climate change grow, one of the ways to cut down on costs is to reduce the fuel used in cooking. Here is a handy list of low energy kitchen gadgets that are eco-friendly and easy to use – and, most important, turn out deliciously prepared food. 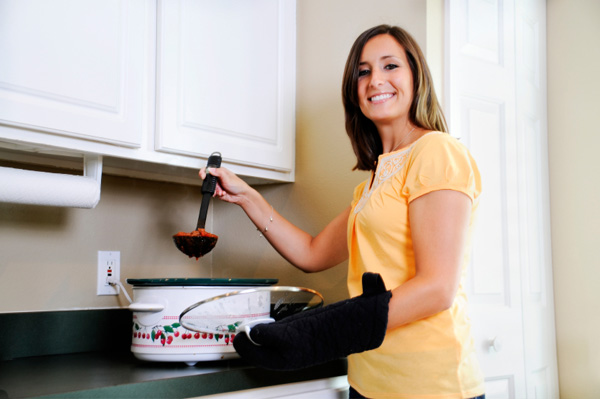 Using a stacking stovetop steamer, which has multiple levels, means that you can steam vegetables in one level while cooking pasta, rice or potatoes in the other. Stacking steamers use one burner
rather than two or three. Steamed vegetables are also more colorful and healthier; the steamer allows them to retain more nutrients.

Slow cookers use only a small amount of energy and are fantastic for cooking cheaper cuts of meat, especially beef, such as pot roast and beef stew, or mutton. Slow cookers also make great
vegetarian stews and soups, and even desserts like apple pie. Even tough cuts of meat become really tender and the lid
and long, slow cooking keep all the flavor and nutrients in.

For soups and stews, prepare all the ingredients (brown the meat for the best flavor), combine with hot stock, put in the slow cooker, and leave it for five to eight hours – it’s as
easy as that. Start your slow cooker meal in the morning and it will be ready for supper later in the day.

Pressure cookers cook food more quickly because the high pressure means that the food gets to a higher temperature. Pressure cookers use less energy and less water, resulting in foods with more
flavor and nutrients. Pressure cookers are ideal for things that need long cooking, such as dried beans, and can be used to cook whole chickens in about 20 minutes and potatoes in about eight
minutes! Risotto, which typically takes a long time to make, with a lot of stirring, will only take about eight minutes in a pressure cooker
once the onion and garlic are cooked.

There’s more to a microwave than just reheating a frozen dinner or cooking a baked potato (though it’s great for that). Cooking vegetables in the microwave is very energy efficient and
keeps more of the flavor and nutrition in – just use a minimum amount of water and make sure the vegetables are covered. Microwaving potatoes before baking cuts down the cooking time, and yet
ensures that the skin is still crispy. Try using the microwave to make lasagna, with a microwave cake in a mug for dessert.

Hay boxes are a traditional form of cooking that use insulation such as hay to allow food to carry on cooking in its own heat, and are the lowest energy kind of cooking described here. A hay box
can be made out of a lidded box or bucket, or even a polystyrene cool box – in fact, anything that has a lid and is big enough for a covered food dish and a good layer of insulation is
sufficient. There are many waste things that can be used for insulation: hay, straw, corn hulls, or shredded junk mail or newspaper.

To cook food in a hay box, heat the ingredients to boiling point on the stove, put it in a dish with a tight-fitting lid, and pack plenty of insulation under it, around it and on top of it. Leave
it for four or five hours or until cooked; don’t worry, it won’t burn. Hay box cooking retains a meals flavor and goodness, and apart from the initial cooking time, the energy costs
will be zero.

If food is kept warm for a long period, it runs the risk of spoiling, which could lead to food poisoning. Make sure you heat the food to boiling point for a few minutes before putting in the hay
box, don’t uncover to check the food until at least four hours (to avoid losing heat in the hay box), and eat hay box food as soon as it is ready.

Gadget-free ways to save energy

Kitchen gadgets can certainly help save you energy and money, but there are gadget-free ways to reduce energy costs and even save you time in your everyday cooking.

While you are cooking:

Using low energy kitchen gadgets is a delicious way to save energy, money and time. Give them a try – while reducing your kitchen’s carbon footprint, they may even inspire you to cook a tasty
eco-friendly variety of new and different foods.