What looks like a boat motor and turns simple soups into gourmet meals? An immersion blender, sometimes called a stick blender, wand blender, or hand blender, and oftentimes lovingly referred to by its fans as a boat motor. These kitchen gadgets, which were virtually unheard of several years ago, attained culinary rock star status overnight. Now, they are must-haves for foodies, soup lovers, bakers, smoothie makers, and anyone who can cook and loves truly useful kitchen gadgets.

Immersion blenders are easy to operate 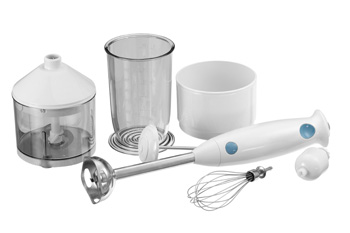 This invaluable kitchen
gadget is so well loved because, as far as design goes, an immersion blender is only slightly more complicated to use than a cutting board (and we all know how hard those are to figure
out – not!).

The typical immersion blender comes in two pieces: the handle and the shaft. The shaft is typically about 12 inches long, can be immersed in liquid (hence the term immersion blender), and usually
ends with a super sharp set of whirring blades that turn food into delicious puree. At its most basic, the handle has a single button which can be pressed to turn the blades into time-saving and
effective culinary weaponry.

As these kitchen boat motors have become more common, manufacturers have begun to produce advanced models with varying features and attachments beyond the basic one button model.

Cordless: Today’s stick blender can have a cord or can be cordless (a great feature since the cord always seems to get in the way).

Speeds: Some immersion blenders have varying speeds like a regular blender. This is nice because harder foods do well when blended on slower speeds as do some delicate foods like
cream. Ultimately, having more speeds means more control over the texture of whatever you blend.

Versatile attachments: Even better, some immersion blenders have handy attachments other than the shaft with the blending blades. In fact, there are attachments to replace nearly
all of the functions of blenders, food processors and even stand mixers. This includes food processor-like choppers, discs for whipping cream, paddles for mixing soft ingredients, whisks, and a
select model even has an electric knife blade attachment. Still, no one manufacturer is producing a stick blender with all of these attachments, so when choosing a stick blender, you will have to
decide which attachments you’ll find most useful.

Ultimately, you are looking for something that suits the way you cook. If you have never bought an immersion blender, there is nothing wrong with getting a corded, basic single speed blender. Once
you see how versatile this kitchen gadget can be, then you can experiment with the different attachments, speeds and power options of a more advanced model.

Immersion blenders may just surprise you

Now, if you still doubt the utility and power of the immersion blender, what follows may just change your mind. Try using an immersion blender to make a cake. That’s right, normally the
province of the stand mixer, stick blenders do a great job of making batters. Use your favorite cake recipe or try the following Red Velvet Cake recipe, adapted from FabulousFoods.com.