It’s a common scene in many an American living room — the guys staring intently at the TV, only moving for the occasional high-five or to grab another beer. There’s some banter about what the next play will be and some expletives about the ref’s decision — all while you listen quietly pretending you knew tight-end was a position and not a compliment on the player’s derriere. Don’t despair! Get into the action using this handy guide to football. 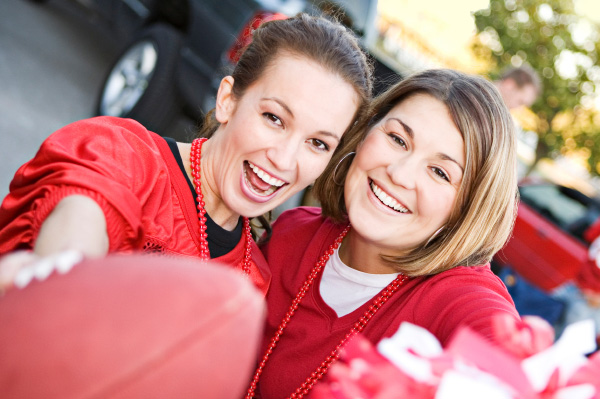 Once you understand football, you might be surprised to find out you like it just as much as your man! Impress your armchair quarterback this game day with a little knowledge of the basics of America’s favorite sport. This article is based on pro football, which may have slightly different rules or conventions than college or high school. 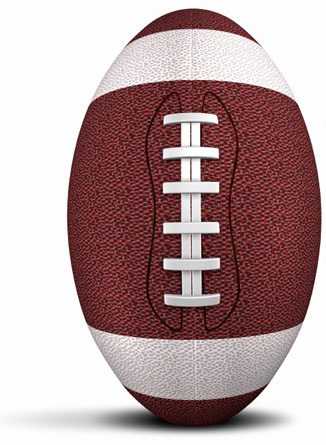 Football is played on a 120-yard field divided into 10-yard increments: 100 yards of playing field, and 10 yards for each end zone, which you’ve probably already worked out the players have to cross into to score.

Who gets the ball first is determined by the coin toss. Whichever team wins gets to choose one (but not both) of the following.

The team who loses the coin toss gets to make whichever of these decisions the winning team didn’t choose. At the beginning of the second half (quarters three and four), the team that lost the original coin toss gets that decision.

The team that’s on offense (trying to score a touchdown) receives the ball — the other team’s kicker is responsible for kicking it to them. The player who catches it (the kick returner) may either run with the ball toward his end zone (the one he’s facing) or kneel to indicate they’d like to take the ball at the 20-yard line.

The offense has four chances (downs) to get at least 10 yards toward their end zone with the ball. You’ve probably heard the phrase “first and 10” before. This means they’ve started the first run of their first down and have 10 yards to go before they get the next one. You might also hear them say “second and eight,” etc. The first number indicates which down they’re starting (first through fourth) and the second indicates the number of yards they have to take the ball to get the next down (10 yards or fewer unless penalties or lost yards are involved).

After a quick huddle to determine their strategy (which play they plan to use), the teams will line up on either side of the line of scrimmage (the line that indicates where play will start — the location where the ball was when it went out of play during the last down). The quarterback throws, tosses or hands the ball to another player, usually to a running back (who typically tries to remain close for short passes or handoffs), a wide receiver (who will run further down-field for a long pass) or a tight-end (which is somewhat of a hybrid position between the first two).

Note: Sometimes, the quarterback may call “an audible,” which means he’s changing or calling the play at the line of scrimmage, often in response to the the defensive lineup .

If the quarterback is incapable of making a pass because the other team is blocking his receivers (that is, they aren’t “open”), he may try to scramble (run with the ball himself). This is a bit dangerous, as quarterbacks aren’t equipped with the same amount of padding as other players, and if he’s tackled behind the line of scrimmage (called “sacking”), the team will actually lose yards.

If the team doesn’t think they can get a touchdown (because they’re not in the “red zone” — within about 20 yards of the end zone), they may kick a field goal if they’re close enough. This is done by a special group of players (special teams) featuring a kicker. This is usually done if at the end of the third down, they feel they’re unlikely to get a touchdown in the fourth down. They like to do this when the line of scrimmage for the fourth down is within about 30 yards of the end zone, though some kickers have been known to attempt (and sometimes make) 50- and 60-yard field goals. To score, they must kick the ball between the goal posts (“uprights”) and over the bar that joins them. They may also use the fourth down to punt the ball the wrong direction to worsen their opponent’s field position and avoid risking turning over the ball so close to their end zone.

Whether or not the offensive team scores by the end of the fourth down, it’s now their turn to kick the ball to the other team. There are different players for offense and defense. While there are defensive positions on the offense to protect the quarterback, the goal of the defense is to prevent the other team from scoring, either by preventing the quarterback from throwing the ball or by tackling someone who’s running toward the end zone.

While the defense can’t lose points for the team, there are rules they must follow when tackling and blocking to prevent serious injury or unfair play, the violation of which could result in penalties that give an advantage to the offense that could make it easier for them to score.

The defense is comprised of three main groups. The defensive line attempts to rush or attack the passer (if they can get past the offensive line) and stop running plays. They line up directly at the line of scrimmage (usually with a three-point stance in which one hand touches the ground).

The linebackers line up behind them (usually in a two-point stance with no hands on the ground) and perform multiple functions as necessary. They may rush the passer, cover receivers to prevent them from being open or assist with defense against running plays.

Finally, the defensive backs, who line up in the rear or near the sidelines, defend against pass plays by blocking wide receivers and tight ends and act as the “last line of defense” against running plays. They also may attempt to intercept the ball, sometimes even running it in for a touchdown. If that happens, possession of the ball (the team on offense is said to be in “possession”) is returned to them for yet another attempt at scoring. This continues through each quarter until the clock runs out.

At the beginning of each quarter, the clock is set to 15 minutes. It continues to run even when the ball isn’t necessarily in play unless a penalty is called, a passing play is incomplete or when a player goes out of bounds. It will also be stopped during a timeout called by the coach, during a timeout called by a referee (usually to handle business like measuring and reviews of confusing plays) or during a coaches challenge (in which the coach throws a weighted red flag onto the field to indicate he believes a call is unfair, requiring the referees to take 90 seconds to review it). It also stops automatically at the two-minute mark at the end of each quarter.

The ultimate goal is to score a touchdown by running into or catching the ball in the end zone. This results in six points and the opportunity to kick a type of field goal known as a place kick to earn one extra point. If one extra point isn’t enough, the team is also allowed to run a two-point conversion, in which they forgo the kick attempt an try to score another touchdown to earn up to two extra points instead of one. If they’re unable to score at all and give up their last down to kick a field goal in lieu of that, they’ll score three points. If the quarterback is sacked, the other team earns two points.

Did you get all that? If not, bookmark this article on your smartphone so you can cheat during the game while you pretend to text your friends. There are, of course, a lot more rules (and a lot more players), but knowing the basics should help you figure out the rest a lot more easily!