Greece is a beautiful country, with a long history and a culture of good wines paired with good foods – in fact, the Greeks will rarely drink without eating. In the chill of winter, what better way to remember your summer Greece vacation (or to dream of a future holiday) than to drink a glass of Greek wine and eat authentic home-cooked Greek food? Here is a list of luscious Greek food and wine pairings. 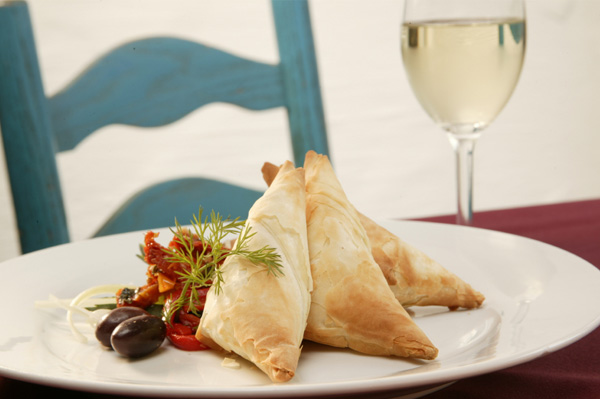 This white wine is from a vineyard in Mantinea, a mountainous region in southern Greece, in the prefecture of Arcadia. This is a fragrant, sharp and refreshing white wine, made with Moschofilero
white grapes, grown especially in the Peloponnese.

A bottle of Mantinea pairs deliciously with kotopoulo souvlaki (grilled chicken on skewers) and a Greek salad.

This is an unoaked Chardonnay – a dry, bright, crisp white wine with a light fruity taste. The winery, Costa Lazaridi, began in 1992, and is based in Adriani, in Drama, a region of
northeastern Greece.

This Chardonnay is delightful with grilled fresh fish and seafood, such as grilled calamari.

This white wine is made from two Greek varieties of grapes, Savatiano and Asyrtiko. It comes from the Harlaftis estate of the Athanassiadis Winery, on the northern slopes of Mount Pendeli in
northeastern Attica, not far from Athens, in southern Greece.

This white wine is fragrant and fruity, with a lot of body. It would hold its own with keftedes (Greek meatballs) or
grilled sardines.

Amethystos Red, also from the Costa Lazaridi winery, combines Cabernet Sauvignon and Merlot grapes with Limnio, believed to be an ancient Greek grape variety. The name Amethystos means “not
drunken”. In Greek myths, a mortal made Dionysius, the god of wine, angry. Dionysius vowed to take his revenge on the next mortal he saw, a girl called Amethyst. The goddess Diana turned her
into quartz to protect her. There is a legend that anyone holding an amethyst will not get drunk.

Amethystos Red is an oaky, rich and black curranty red wine, and partners quite well with moshari yiouvetsi, an herbed beef and pasta casserole, or arnaki kleftiko
(bandit’s lamb), a slow-cooked dish of lamb and tomatoes.

The Tsantali winery was founded in 1970 in Naousa, in the Greek province of Macedonia. This wine comes from Grevena, from northwest Macedonia. The Moschomavro grape variety is grown only over a
small area in western Macedonia and parts of Thessaly, and the name means “the fragrant black.” This wine is dry, yet really soft and fruity, with lots of blackberry flavor and a deep,
strong red color.

Moschomavro is just right with good bread, olives and a selection of Greek
cheeses.

Another red wine from the Tsantali winery, Rapsani, that is made with three Greek grape varieties: Xinomavro, Krassato and Stavroto. The grapes are grown in a vineyard on the southern slopes of
Mount Olympus, the mythical mountain of the gods.

This is a good solid red wine with a bit of fruit and spice, and ideally pairs with moussaka on a cold night.

Mythos is a pilsner-style lager created in Greece in 1997, and brewed in Thessaloniki. The Mythos Brewery is now a subsidiary of Carlsberg. Mythos is a light blonde beer with some flavor of hops
and a touch of sweetness. It would work with Greek meze, a selection of finger foods often served with drinks.

If pilsners aren’t appealing to you, you can sip a lager-style beer, such as Marathon and Alfa Hellenic from Athenian Brewery.

Finding Greek food and wine in the States

If you can’t hop a plane to eat and drink your way around Greece, you can take advantage of the growing number of companies that import Greek food and wine, including Greek Food and Wine and Nestor Imports.