We all enjoy a good barbecue in the summer, but instead of the typical burger and hot dogs, why not try something a little more exotic, like Korean BBQ. Classic Korean BBQ resembles American BBQ, with chicken, pork and beef as the main ingredients, but is unique in that grilled foods are usually eaten in a lettuce wrap with spicy accoutrements. Here are some Korean BBQ recipes so you can create your own special Korean BBQ cookout. 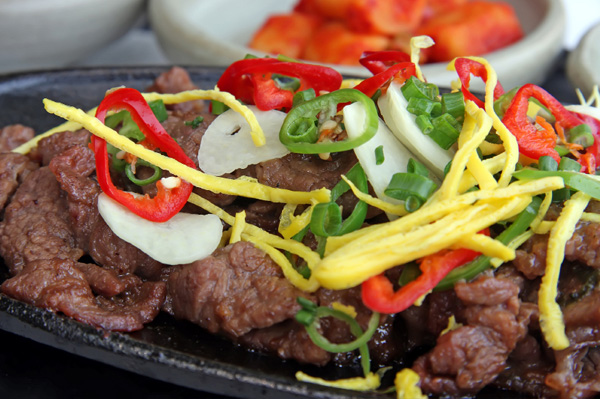 Korean BBQ has become increasingly popular in restaurants across the country because of its unique flavor and distinctive grilling method. Many Korean BBQ establishments are even equipped with
in-table grills to let the diners do their own cooking.

But you don’t have to have in-table grills to enjoy Korean BBQ at home; you just need to have a grill, grill pan or a skillet. True, you won’t get the grilled flavor or grill marks
using a skillet, but the basic concept is the same, allowing you to adapt Korean BBQ recipes to the kitchenware you have on hand.

There are two types of Korean BBQ, one type features marinated foods while the other features food that has not been marinated. With the marinated type of Korean BBQ, each meat –
beef, pork or chicken – has a different marinade and cooking style that accompanies it.

There are a few different kinds of beef marinades, but the most popular is galbi (recipe below). Typically made with soy sauce, lots of garlic, and brown sugar, additional ingredients such
as citrus juice, rice wine, sesame oil, a spicy paste, and ginger can also be added. Meat used for galbi is usually a beef short rib that is cut very thinly. This ensures that
the meat will better absorb the flavor of the marinade. Also, thinner slices of beef are easier to wrap in lettuce and easier to pick up with chopsticks. A charcoal grill is the
best way to cook this type of Korean beef dish.

The most common type of Korean BBQ pork is a spicy pork dish called bulgogi (recipe below). There is also a beef bulgogi, but the marinades are different. The marinade for
pork bulgogi is usually some kind of chili powder or spice paste, garlic, sesame oil and pear juice. Boneless pork is the best choice for bulgogi and it is usually cooked in a
skillet.

A popular version of Korean BBQ chicken is to make it as a spicy stir-fry dish also known as dak galbi (recipe below) with lots of vegetables and a spicy marinade. The marinade typically
contains soy sauce, ginger, sesame oil, brown sugar, green onions and lots of chili powder or chili paste. Boneless chicken pieces should be used and can be stir-fried in a skillet on the stovetop
with a variety of vegetables like cabbage, baby corn and string beans or any other vegetables you like.

1 cup fresh fruit juice such as pineapple, orange or pear

2. Dip meat in juice and add meat to bowl with marinade. Let marinate in the refrigerator for about 2 hours.

3. When ready to cook, heat grill or grill pan to medium heat. Place meat on grill and cook 2 to 3 minutes per side or until cooked to desired doneness. Serve with lettuce wraps.

Note: The meat will cook quickly because it is so thin, so take care to not overcook it.

2. When ready to cook, heat a skillet over medium heat and cook pork until fully cooked through. Serve with steamed rice and vegetables.

A few handfuls of baby corn

1. Place chicken in a large bowl with rice wine and black pepper and let sit while making marinade.

3. Heat a skillet over medium heat with a few teaspoons of sesame oil. Add green onions, corn, carrot and cabbage and cook for 6 to 7 minutes or until carrots are almost tender. Add peppers and
chicken.

4. Stir fry until chicken is cooked through. Serve with rice and lettuce wraps.

Making the best hamburger on the BBQ