Since the cute little paper valentines you shared in grade-school, you’ve associated Valentines Day with innocent crushes, eventually tying the holiday to love, lust and romance. But do you really know how Valentines Day came to be or how it is viewed in other cultures? Here is some Valentines Day trivia plus two delectable Valentines Day recipes to share with your lover this steamy-hot holiday. 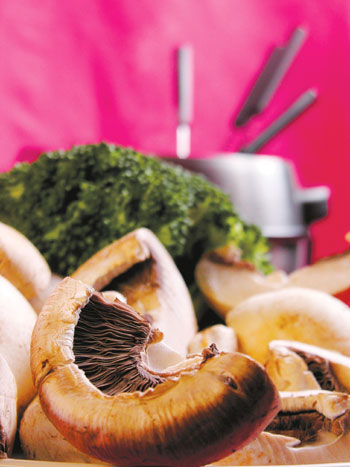 If you are looking for ways to extend conversation during your Valentines Day dinner (you know, to heighten the hot anticipation for after dinner loving), woo your date with your amazing knowledge of the meaning of the heady heart-felt holiday. Feed him these facts.

Valentines Day is related to the She-Wolf

Centuries ago, the ancient Roman festival of Lupercalia was celebrated February 13 to 15 to cast out evil spirits and bring health and fertility. The name Lupercalia comes from Lupa, the She-Wolf who suckled the infants Romulus and Remus, the founders of Rome. The early church then Christianized this annual ritual as it did with other pagan celebrations, such as Halloween/All Saints, Christmas/Solstice and the like.

Valentine was the name of martyrs

There were many martyrs named Valentine (in 1969, the Catholic Church had recognized 11. One in particular seemed to have set the stage for Valentines Day, supposedly executed for his refusal to convert to paganism and writing a final note to his beloved signed “from your Valentine.” It is believed he “healed” his beloved, providing her with sight, perhaps inspiring Shakespeare’s popular quote “love is blind.”

The British beat us

The first mass-produced valentine in the United States was created by a woman named Esther Howland, who was inspired by an English Valentine she received. Apparently, the British were exchanging valentines long before it became popular here in America.

Women purchase the majority of Valentines

Valentine’s Day is the second biggest card-sending holiday of the year, right behind Christmas, with more than 1 billion sent. And it is women who purchase 85 percent of Valentine cards.

The gift-exchanging ritual came about in the 20th century

It was during the second half of the 20th century that exchanging gifts became part of the ritual, from roses to chocolates to diamonds. Let’s not forget the lusty exchange of suggestive looks, texts, pokes, tags and tweets.

Valentines Day is celebrated in other cultures – in different ways

There are many variations on the Valentine theme as there are countries. Some examples that are in unique contrast to ours are:

In Guatemala, “Día del Amor y la Amistad” is a “Day of Love and Friendship,” and while similar to ours, there are also acts of appreciation done for friends and family.

Brazil celebrates Dia dos Namorados (Day of the Enamored) on June 12th instead of February 14th, because it would conflict with Carnival if held in February.

In Japan, it’s an “obligation” for many women to give chocolate to male co-workers (giri-choko) and there’s now a date (March 14th) for men to return the favor.

There are similar dates in South Korea, too, with the additional date of April 14th added for “singles” to eat black noodles in mourning of love.

And interestingly, in Saudi Arabia, Valentine’s Day paraphernalia was recently banned by the religious police, creating a black market for roses, wrapping and all things “red.”

That should take your through dinner. If you are at a loss for what to serve, try this fantastic fondue and signature Valentines Day cocktail. 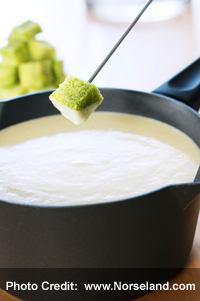 Feed your lover ooey gooey cheese-dripping treats to heat up your evening romance. Then enjoy the leftover fondue and dippers as a tasty “morning after” omelet or frittata.

Directions:
1. In a small bowl, toss cheese with flour. In a fondue pot, heat wine with garlic until bubbles rise to surface, taking care not to boil. Add 1/2 cup cheese, stirring constantly until melted. Repeat until all the cheese has been added and melted. 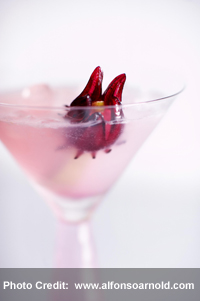 This is a succulent signature cocktail created by Danielle Tatarin of DesignerCocktail.com

Directions:
Shake vodka, nectar, syrup and lime juice in a shaker with ice. Strain over crushed ice in a martini glass and top with a splash of soda. Stuff a hibiscus flower with a long pear spear then place on the side of glass to garnish. Note: To prepare pear, cut a piece of fresh pear lengthwise, making about a 3- by 1/2-inch spear.

Love up to a low-fat fondue
Try a decadent dessert fondue for two
Warm up with these spicy hot cocktails
Check out our very best Valentines Day gift lists, recipes, date ideas and more
Try these Valentines Day tips, tricks and gift-giving ideas