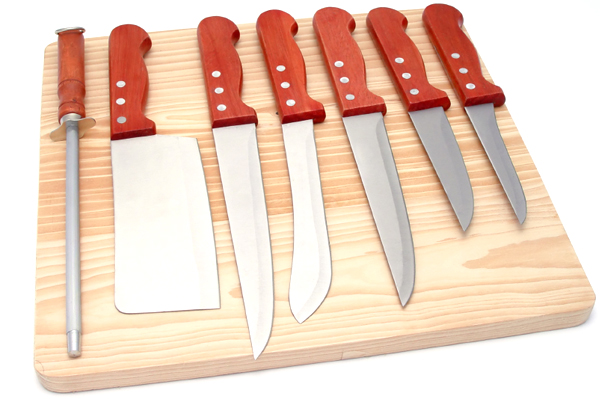 Knives have a history

The earliest known knives were made out of rock and bones. They were shaped and sharpened by flaking off parts of the rock or bone with other, harder rocks, like flint. In early times, people did not have the luxury of cutting their foods with a variety of blades that are available today. With the advancements in just about all kitchen appliances, including knives, your kitchen blades are one product that will make your prepping and cooking time easier.

Many professional chefs will say that they favor a specific brand of knives and that once they become accustomed to their own set, they don’t want to use any other. This is because they get comfortable with the weight, the grip and the feel of how each knife cuts. Often times when a chef changes sets or uses another person knifes they are not as comfortable with the feel. Same goes for the home chef — once you learn more about your set of knives and start properly using it, you will grow accustomed to how the knives feel in your hand.

Chef’s knife: Also called a French knife, this knife has a blade that is eight to 14 inches long with a wide heel that tapers to the tip, thick blade and large handle. It is used for basic cuts for vegetables and fruits. It can also be used as a utility knife for just about anything that is being cut. However, it is best used for cutting fruits and vegetables. This is considered the most important and versatile knife to own in a knife collection. Utility knife: This is an all-purpose knife with a rigid six- to eight-inch blade that is shaped like a chef’s knife, but narrower. It is used for cutting fruits and vegetables and carving poultry. Fish or fillet knife: This knife has a thin blade and is approximately eight inches in length. This is used to remove the fillets from a whole fish for bone-free cooking. The flexibility of this knife allows the cook to slice around fish bones and easily cut the skin off the fillet of fish. Boning knife: A boning knife has a curved and thin blade that is five to seven inches in length. Even though the blade is thin, it is quite sturdy. Unlike the chef’s knife, of which the heel of the blade is used to cut, the tip is used on the boning knife for cutting. Best used for breaking down proteins (such as beef and poultry), this knife’s shape and thin blade makes cutting meats easy. Paring knife: A small, lightweight knife with a two- to three-inch blade, the paring knife is mainly used for Garde Manger — or, in lay terms, the production of cold foods and garnishes. This small knife makes for easier control when cutting small food products and making small cuts. Bread knife: Graced with a serrated edge, a bread knife is 12 inches long and used for cutting any type of bread product. The teeth on this knife make it easier to slice through the crust and crumb of bread with out squishing the loaf. It allows for an efficient sawing motion. Tourne knife: Similar in size to a paring knife, a tourne knife is curved in a half moon shape. It is used for peeling vegetables, such as potatoes. The curved shape fits the shape of most round vegetables which makes it easier to take skin off without excess waste or cutting a finger. Slicer: Also called a meat slicing or prime rib knife, this blade is thin, pliable and about 12 inches in length. Little air pockets on the blade help slice through large pieces of meat such as prime rib or near effortlessly carving a turkey without tearing the meat. Cleaver: Large with a rectangular blade, the cleaver is used for chopping meat or cutting through bones. Steel: Not technically a knife, a steel is included in most knife sets. It is a long thin stake that is used to hone or straighten a knife after and in between sharpenings.