Did you know that cooking fires are the most common causes of home fires and home fire injuries? Pans left unattended while hot on the stove are obvious culprits but there are a number of less obvious causes that may be news to you. Because house fires are extremely dangerous for your family, the theme for this year’s National Fire Prevention Week (October 5 – 11) is Prevent Home Fires. Here are 10 tips to prevent kitchen fires and keep your family safe. 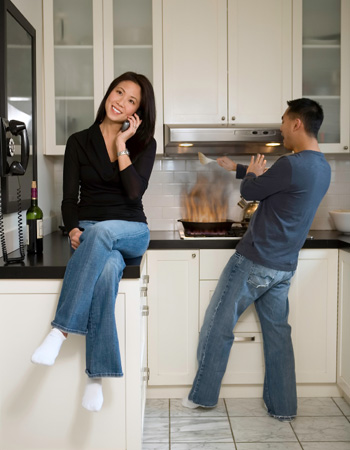 According to the National Fire Protection Association, cooking fires are not only the leading cause of home structure fires, the majority of kitchen fire injuries occur when victims try to fight the fire themselves. Wouldn’t it be smarter to avoid cooking fires altogether? You can, with the following kitchen safety tips from third generation and 30-year fire department veteran John Borboa, fire chief in the Central Valley of California.

Stay in the kitchen

Long, flowing sleeves, large-fitting shirts and even aprons can catch fire. Borboa recommends that, when cooking, wear short or close-fitted sleeves and keep your baggy shirts tucked in or tied back with a well-fitted apron.

Be aware of the items around the stovetop

Kitchen towels, oven mitts, appliance cords and even curtains can easily catch fire if set near a hot burner. Always move flammable items away from your stovetop. “And be careful when using towels to move a pot off the burner. Ideally, use an oven mitt, but if using a towel, be sure it doesn’t dangle down and touch the burner,” adds Borboa.

Keep a fire extinguisher in or near the kitchen

In the case you do have a fire, a fire extinguisher can make the difference between an easy to clean up burned pan and a kitchen engulfed in flames. Be sure you actually know how to use it, too.

Change the batteries in your smoke detector

Never throw hot grease in the garbage can

“First of all, know the smoke points of your oils and never subject an oil with a low smoke point to high heat cooking – it can catch fire,” says Borboa. “Second, never throw hot grease in the garbage can. Even if the grease isn’t on fire, it can cause something in the garbage to burn.” Instead, let grease cool and dispose of it in an old coffee can.

A smoke point is the temperature at which an oil starts to break down. In addition to being a potential fire hazard, it can be damaging to your health. Fats that have gone past their smoke points are believed to contain large amounts of free radicals, which contribute to cancer. Refer to this smoke point chart for the optimal temperatures for your cooking oils.

Keep your candlelit dinners romantic by keeping the heat onlybetween you and your mate. Candles are another common cause of house fires. In addition to using wider, shorter candles, which are less likely to tip over, be sure to extinguish candle flames as soon as you are done in the kitchen.

Be prepared to put out a fire

Though you don’t want a fire to occur, be prepared in the case it does. Borboa says, “The best thing to do if you have a stovetop fire is to put a proper fitting lid over the pan or pot to smother it. Never use water and never pick a burning pan up and put it in the sink – you not only risk spreading the fire to the sink, you risk getting badly burned if the burning ingredients slosh out.” Another recommendation from Borboa: “Don’t use flour to put out a fire – it can burn, too – and it makes a mess.”

Have a fire escape plan

Keep the fire department telephone number written and/or programmed on your telephone. Sit down with your family and have a fire escape plan that includes getting out of the house and meeting outside in a designated area. It’s important that your family – especially your kids – know what to do beforea fire occurs. Practice your plan every month.

“In the event you do catch fire, follow the Stop, Drop, Roll Principal. Don’t run if your clothing catches fire – stop where you are, drop to the ground, and roll,” concludes Borboa. Then get to a hospital to get treatment for your burns.

Don’t ever hesitate to call your local fire department – even if you have successfully put out your fire. It’s better to be safe than sorry. Practice fire prevention measures every time you are in the kitchen, and be sure to pass the measures on to your kids.

Warm up the night: Patio heaters and fire pits
Is your home a security risk?
What to do if your oven catches fire