Some foods these days, especially those marketed to kids, are so brightly colored that they look like they’re from a horror flick. Red fruit roll-ups are like the color of fake blood, and bright blue Kool-Aid drinks remind us of lights on an invading UFO. When the colors of the food you eat don’t look like those found in nature, should you worry? 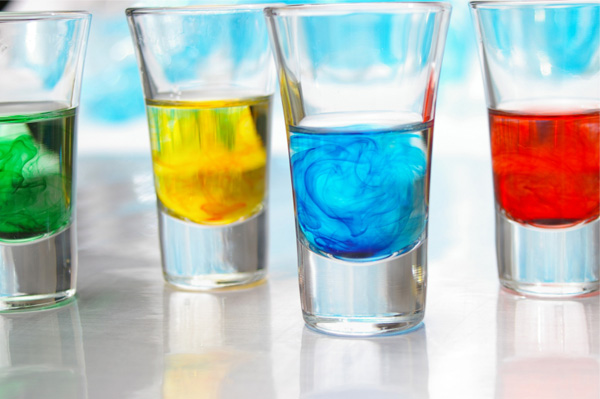 In 1976, the FDA announced that the red dye amaranth was a carcinogen. Suddenly, shoppers everywhere were running from all things red. And the manufacturers jumped on board, too. The makers of m&m’s made a big to-do and even replaced the red candies with orange.

But every good horror film has a sequel, and so does the frightening tale of food coloring. Today, food manufacturers no longer use amaranth — but they do use Red 40 as well as Yellow 5, Blue 1, Blue 2, Green 3, Orange B, Red 3 and Yellow 6.

And here’s the scary part: Recent British studies have linked these artificial food colorings to behavioral disorders in children. That’s right: The increasing number of children diagnosed with ADD, ADHD and other disorders may be, in part, a result of our children’s artificially colored diet.

The UK and parts of Europe responded immediately to these studies and have begun phasing out these artificial food colorings. And once again, the food makers have jumped on the bandwagon — but only when forced. Kraft and Mars have removed these dangerous dyes in foods sold to the UK, but apparently, American customers aren’t screaming loudly enough. The very same products sold in the good old USA still contain these harmful food colorings. It’s enough to give you nightmares!

Despite the evidence that color-enhanced foods are dangerous for our kids, the FDA refuses to ban the colorings from our foods. Even worse: Food manufacturers are using these colorful chemicals five times more than they were 30 years ago.

The FDA insists that Americans want brightly colored foods, but what we really want is to protect our children. So if the government won’t help us eliminate these harmful additives from our diets, we have to take matters into our own hands.

Here’s what you need to know to keep yourself and your family safe.

1.  Avoid these food dyes at all costs:

2.  Some manufacturers are sneaky about listing ingredients under unusual names.  Learn these aliases for food colorings:

3.  Sometimes, “lakes” are listed as ingredients. This is also harmful food coloring — in its water-insoluble form.

4.  You can find foods that are naturally but colorfully enhanced. These additives offer a safer color boost:

5. You expect to find color enhancers in the usual junk food (candies, ice cream, cakes etc.).  But you’ll find them in “healthier” foods such as:

Artificial food dyes are dangerous — end of story. Read labels and avoid these harmful dyes at all costs. You’ll have calmer kids and sweet dreams once again.

10 hrs ago
by Marshall Bright

4 Can Openers That Do Way More Than Just Open Cans