Craft-brewed beer is on trend in the foodie world. But you don’t need to become an expert to identify a good craft-brewed beer. Learning about beer is easy and fun, and best of all, you get to learn by tasting! 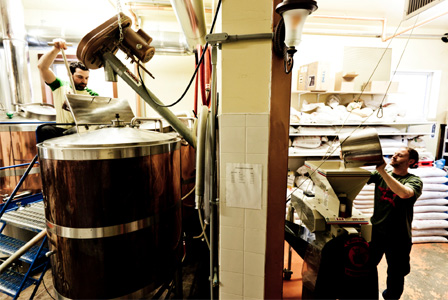 Here are some helpful hints to make you an aficionado in no time.

You may have noticed an interesting phenomenon as of late. Are strange new beers appearing on the shelves of local grocery stores and in restaurants? These craft beers from local breweries have been gaining in popularity since the mid-2000s. A lot of them have fun, quirky and sometimes even irreverent labels that may have piqued your interest. Don’t be scared! All you need is a little Craft Beer 101 and a sense of adventure!

So, what is a craft beer?

Craft beers are typically from small, independent breweries — so small, actually, that they barely peak at 2 million barrels a year. Also called “microbreweries,” these folks focus on creating a traditional local flavor or putting a fun new spin on old favorites. But not all local beer comes from microbreweries. You may find a local brewpub that has facilities where they create artisan brews you can only find in their restaurant. Some of the big boys are also getting in on the game, putting out some fun flavors of their own. These may not be considered “craft beers” by serious connoisseur, but that doesn’t mean they’re bad, either.

Craft beers often have a more carefully developed flavor than their mass-produced counterparts and you’ll see a lot of specialty flavors and interesting combinations. If you’re used to drinking one of the Big Three (whose Super Bowl commercials we all know and love), you’re missing out on these interesting and sometimes complex brews. And remember, craft beer doesn’t mean dark and bold, it just means different.

Much like wine, every craft beer has specific qualities that are affected by its ingredients, the region it’s produced in, how long it was fermented and more. Many Americans are only familiar with what’s called an American pilsner (a pale lager, i.e., Budweiser). But if you’ve already ventured into the deeper waters of Sam Adams, you’ve had something called a Boston lager, which is a bit darker and more robust.

The DNA of beer

For the most part, beer is barley, hops, yeast and water that are allowed to ferment. Different beers use different qualities and combinations of these ingredients, which affect the flavor, color and head (foam) of the beer. Additionally, they may have other ingredients, depending on the type of beer and the season in which it’s brewed. Summer beers may have citrus or other fruit flavors, while winter beers are often brewed with spices like nutmeg and cinnamon.

You’ve probably heard the terms “ale” and “lager.” In The States, the lager is king, so if you’re a novice, that’s probably what you’ve had. Lagers are crisper and cleaner in flavor, whereas ales are more robust and complex. But there’s a third category of beer you may not be familiar with called “Lambic” beers. These beers are bright, sometimes sour or fruity and always unique.

But these are just general categories. The possibilities are as endless as the creativity of the brewmaster! If you’re not a fan of Christmas ales because you don’t like the spicy flavors, you probably won’t like any of them. But if you just find a particular brewery’s to have more cinnamon that you care for, don’t give up on them altogether. Similarly, the pear flavor in Ace’s brand is different than the pear flavor in Woodchuck’s. If you think Ace is too tart or dry, try another hard cider brand. The same goes for lagers and Lambics!

If you’re going to add “beer aficionado” to your resume, you need to learn the lingo first. Not only will it help you in those heated discussions with your brew-savvy friends, but you’ll start to understand more about what you’re tasting.

In addition to this key vocab, you should pay attention to the flavors you’re tasting. If you’re a novice, it’s often helpful to read the labels, where they’ll usually describe the beer in mouthwatering detail. Do you taste the lemon (or nutmeg or chocolate)? You can also use your smartphone to search for info about the beer. Don’t worry! It’s not cheating when you’re a rookie. That’s how you learn. If there’s a local craft brewery near you, you can also do a tour if they offer one. They often come with samples that you taste while real experts describe every sensation.