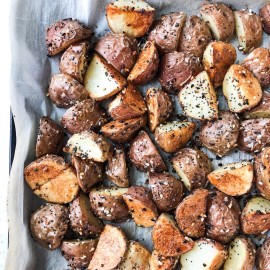 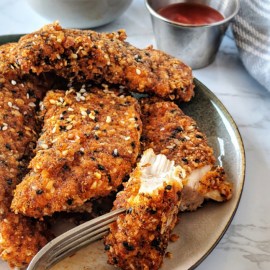 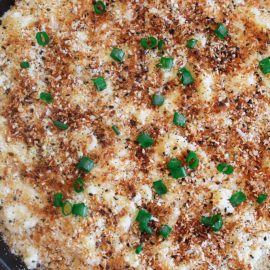 We try not to go grocery shopping without a list in hand — trying to be responsible and all that. But if you don’t let yourself shop off-list when you head to Trader Joe’s, you could be missing out. That’s because they’re constantly introducing new products, and some of them are so good, you’ve simply got to let go and let yourself snatch them from the shelves before they’re gone. The latest Trader Joe’s product we’re obsessed with? Everything but the Elote Seasoning Blend!

If you’ve never had elote, you might be scratching your head. Elote is a tasty Mexican street food snack made by spreading mayo or crema over corn on the cob (handily placed on a stick), then coating the whole thing in grated cheese, chili powder, and lime juice. It’s sweet, salty, tangy, spicy, and utterly craveable.

Well, now TJ’s has created a seasoning blend so you can elote-ify all of your favorite foods. Inside each shaker, there’s chile pepper, Parmesan cheese, chipotle powder, cumin, dried cilantro, sea salt, corn flour, and sugar. You can sprinkle it on mayo-covered corn on the cob, but there’s potential to use it for tons of recipes beyond the expected.

You could make a creamy corn dip that’s so easy to make, you can even bring it camping.

Here’s a super easy & budget friendly creamed corn appetizer made with the new “Everything but the Elote” seasoning ($2.49) 🌽 🥛 🌶 🧀 🍋 The frozen white corn would also be amazing for this recipe too but wanted to keep it simple for someone who needed shelf stable ingredients which would be great for camping with some corn chip dippers🏕 👌🏻 • Directions: 1️⃣ In a saucepan on medium heat 🔥 put a table spoon of salted butter 2️⃣ Open the can of corn and drain all of the juice and pour all of it in the sauce pan 3️⃣ Pour half of the whipping cream (or full fat yogurt) and lower the heat to low and let it boil for 4-5 mins 4️⃣ sprinkle 6 shakes of the everything but the elote seasoning and 2 shakes of the Chile lime 5️⃣ Scoop everything out into a bowl and top it off with fresh Parmesan cheese, dry cilantro (wish tjs sold this) & salt 🧂 to taste 😋 enjoy with some corn chips!! You could easily double this recipe with 2 cans for more people 👌🏻 • Check out my stories ⬆️ and Highlights for even more TJ’s items as well as new & fav kitchen items & swipe up to find out more info ❤️ 🙏🏻 #elote #corn #chili #appetizers #yas #delish #cheese #parmesan #yum #easy #milk #chipotle #love #traderjoesfans #groceryshopping #traderjoesobsessed #traderjoeslove #traderjoesfinds #glutenfree #traderjoes #traderjoesdoesitagain #traderjoeshaul #traderjoesinsider #traderjoesmusthaves #traderjoesfan #traderjoes #cumin #spices #seasoning #newitem #creamedcorn

Or, you could follow Trader Joe’s recipe suggestions. They used Trader Joe’s Everything But the Elote Seasoning Blend (which, btw, is only $2.49) to make crispy chicken tenders, elote-seasoned popcorn, and elote-inspired corn cakes.

We can also see it as being the key ingredient in some fusion cacio e pepe, livening up a dish of simple chicken fajitas, or (why not) using it instead of Everything But the Bagel Seasoning to make some bagels that really pack a flavorful punch.

Like all Trader Joe’s products, this one might only be around for a limited time, so if you want to try it, you should stock up now.

Before you go, check out all of these ways to use Trader Joe’s Everything But the Bagel Seasoning.