Black pepper, grated Pecorino Romano cheese, EVOO, and spaghetti: These are the only four ingredients needed to make cacio e pepe (aside from kosher salt, of course). While this Roman dish — one that literally translates to “cheese and pepper” — may seem simple, it tastes anything but; and it’s precisely why the dish that’s been around since the mid-twentieth century has seen yet another spike in popularity. It’s incredibly quick and easy to make (15 minutes, if you can believe it), and it’s damn good. And we have just the recipes to prove it.

“Cacio e pepe has always had its ardent devotees. But more and more people have been discovering the easy and indulgent satisfaction that comes from just four or so ingredients that they probably always have on hand,” said David Leite, founder of Leite’s Culinaria and author of The New Portuguese Table and Notes on a Banana. “Those Italian nonnas really knew what they were doing.”

Though the recipe requires very few ingredients and makes for a great last-minute weeknight dinner, there are a few insider tips and tricks to making the perfect plate of cacio e pepe. For starters, for the noodles, use tonnarelli if you can find it; if not, spaghetti will work just fine. Plus, Leite urges home chefs use the highest quality ingredients they can afford. “Don’t skimp on ingredients,” he says. “There are so few ingredients; each one really stands out.”

Tip No. 2: Grate the cheese very, very finely. This ensures it melts quickly and readily, Leite adds. “If the cheese is in larger chunks, it can clump rather than properly melt when combined with a little of the hot cooking water. What results when done according to tradition is this sensuous, satiny sauce that clings beautifully to each strand of spaghetti.” It’s also recommended to use cheese that’s as close to room temperature as possible.

And, when it’s time to combine the sauce and spaghetti, do it in a cool pan instead of the pan the pasta was cooked in. This allows you to control the temperature better.

While cacio e pepe tends to trend every few years (it was Rome’s trendiest dish in 2012 and the most popular dish in the U.S. in 2016), there are a handful of tried-and-true recipes that’ll never go out of style, including the following.

“[This recipe] relies on a much less common approach to cooking the spaghetti but draws RAVE reviews,” Leite tells SheKnows. “It actually has you cook the pasta as you would risotto, slowly adding a little of the hot water at a time. And the pasta is cooked with the cracked peppercorns, rather than adding them at the end, to ensure they suffuse the pasta with flavor. And to ensure the pepper lends its utmost pungency to the pasta, you first toast it in hot oil, as you do any other spice, to coax its flavor out. It’s transformative.”

Get the recipe from Leite’s Culinaria.

Asparagus season is here and my Cacio e Pepe Asparagus is beyond easy to make! Perfect with roast chicken or pasta. Recipe on BarefootContessa.com. #farmstanddinner #staysafe

If Ina Garten says it’s good, it’s good. Earlier this week she shared a brilliant recipe for cacio e pepe asparagus and it’s the perfect way to actually get your kids excited about their veggies.

Get the recipe from Barefoot Contessa. 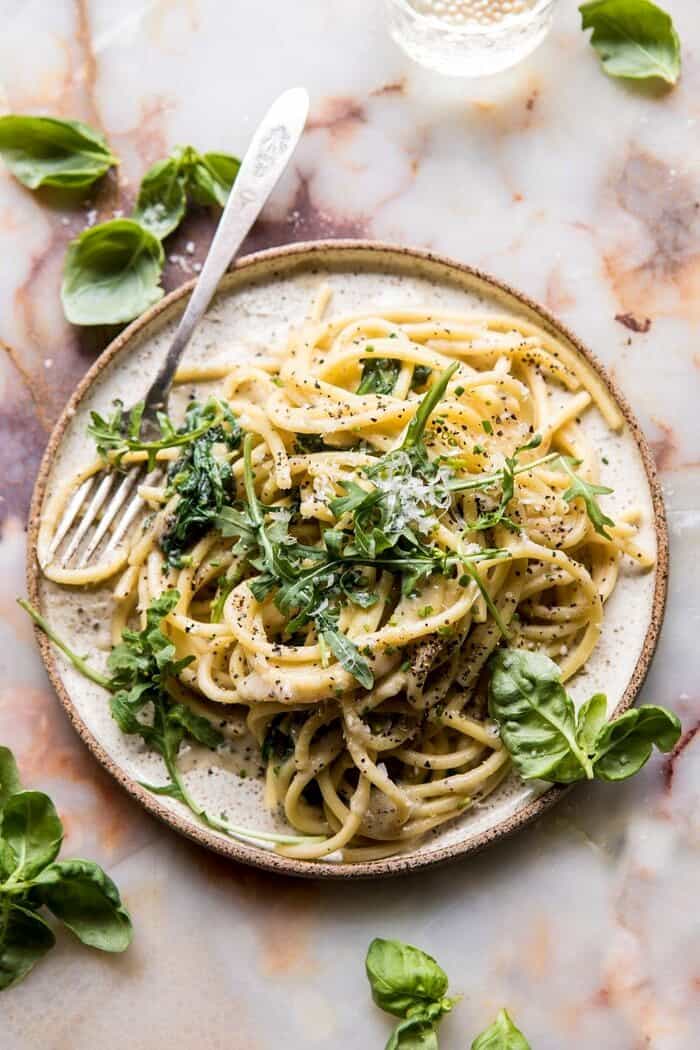 Get the recipe from Half Baked Harvest.

Who better to turn to for the recipe of a Roman dish than Rome native Giada De Laurentiis? Her elevated recipe includes pancetta and frozen peas.

Get the recipe from Giadzy.

For a baked cacio e pepe, Chefs Missy Robbins and Carrie King took inspiration from kugel, the traditioanl Jewish noodle casserole, to put their own twist on the Roman pasta dish.

Get the recipe from Leite’s Culinaria.

We can thank Ina Garten for this very unique twist on cacio e pepe.

Get the recipe from Food Network.

Who says cacio e pepe is just for dinner? The cheese and pepper combo lends itself beautifully to breakfast items and eggs are the perfect vessel for these flavors.

Get the recipe from Cooking With Cocktail Rings.

A version of this story was originally published January 2020.