New year, new Oreo flavors. And so far, we’re all in for a real treat as three new Oreo flavors are on their way to grocery store shelves this year, including the newly announced tiramisu-flavored Oreos, which will come loaded with not one but two layers of creme.

Traditionally made of ladyfinger cookies soaked in coffee and mascarpone and drizzled with espresso and cocoa powder, tiramisu has been reinvented in this new, Italian-inspired Oreo flavor — which is likely to feature all the aforementioned flavors combined. According to Today, the cookies will be available for purchase in April 2020, and an Oreo rep confirmed with the site that they’ll only be available for a limited time once they do hit shelves.

Instagram account @TheJunkFoodAisle broke the news first on Dec. 27, after posting a photo of the rumored tiramisu-flavored Oreos. “Limited Edition Tiramisu Oreo! Coming in April, 2020!” they captioned the photo.

This flavor may be new to the U.S., but it’s been available overseas for years. For instance, Tiramisu Oreo Thins were released in South Korea years ago, and they’re now available on Amazon Prime for $24. 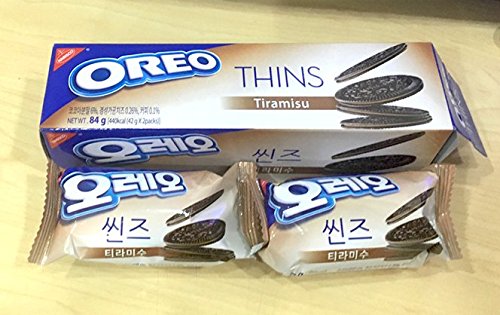 Also expected to arrive in stores early 2020 are two other new Oreo flavors: Chocolate Marshmallow and Caramel Coconut Oreos. The brand confirmed the new flavors in November, and the new Oreos will feature real ingredients, like caramel creme and coconut bits.