Way back in 2017, Oreo released a mystery flavor and asked consumers to try them and submit their best guess for a chance to win a cash prize. The 2017 flavor turned out to be Fruity Pebbles and it was met with pretty mixed reviews. We were super stoked when a new box of the mysterious Oreos landed in our office this week and we could hardly wait to put our palates to the test and figure out this new flavor.

This year’s mystery flavor contest comes with a whopping grand prize of $50,000 if you can correctly guess the new flavor. Entering the contest is easy, just try some of the new Oreos and then visit the Mystery Oreo website to enter your guess.

Every good mystery starts with a twist. And Mystery OREO is no exception! Visit https://t.co/rzgYKvbZ2J for more clues and submit your guess for a chance to win $50,000. pic.twitter.com/QxsaZhYoul

Three SheKnows staffers (myself included) tried the Oreos and not to brag or anything, but I would be shocked if we are wrong.

First, the Oreos arrived in a super secretive package with a clue on the back. 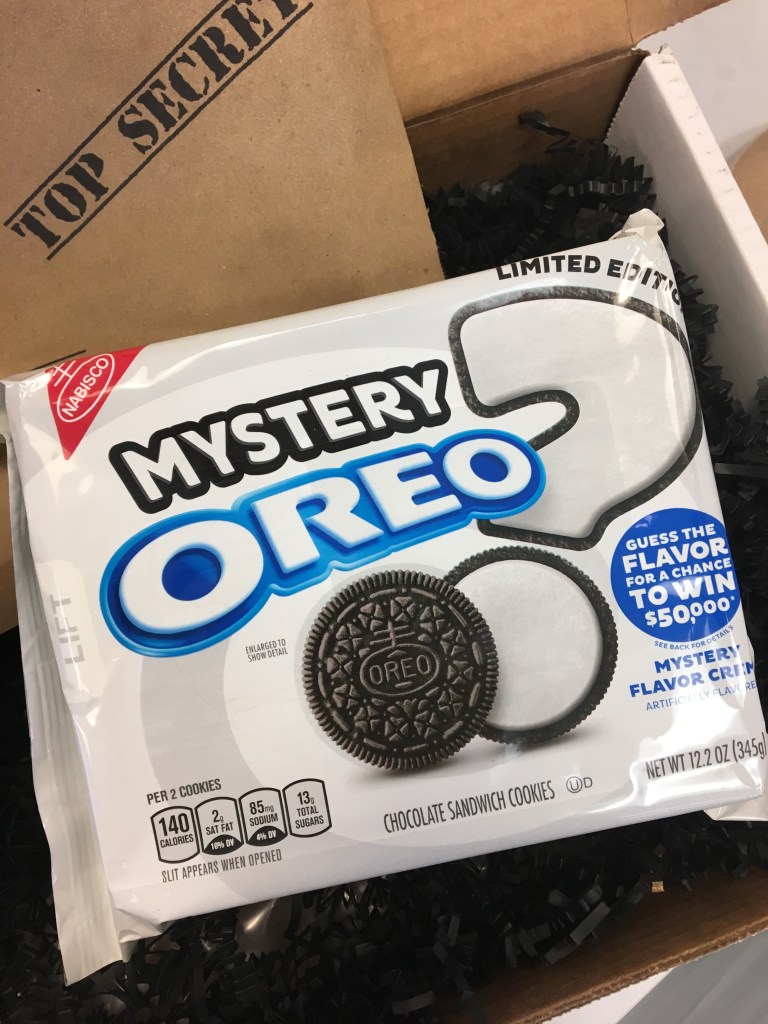 Each package contains one of three clues and ours read “Its name it stole and history kept. Perhaps from a creature that lives on the steppe?”

Honestly, this didn’t help us much so we jumped right into taste testing. When we opened the package, we were hit with an overwhelming aroma of cinnamon so we were thinking maybe chai or cinnamon dolce?

Our graphic designer, Ashley was the first to try them.

Louisa, our entertainment writer tried them next and was pretty sure Ashley was wrong. “Definitely not getting a pumpkin flavor;” she declared.

As SheKnows’ food editor, I was really feeling the pressure to accurately guess the flavor of these mysterious little cookies. There were definitely hints of cinnamon but the first flavor that really jumped out at me was graham cracker. Cinnamon graham crackers maybe? I contemplated a s’mores flavor for a brief second but there’s no chocolate flavor in these (besides the sandwich cookies) so I ruled that out pretty quickly.

Knowing the last mystery flavor was inspired by cereal, we started thinking maybe it could be Cinnamon Toast Crunch? But then it hit us — Golden Grahams! This Mystery Oreos are definitely, without a doubt Golden Graham-flavored. We’re still trying to figure out how that ties in with the clue on the package but we’re pretty sure we nailed the flavor.

Of course, there is like a 0.0001% chance we could be wrong so you should definitely go grab a package of these and try them for yourself. The sweepstakes lasts from September 15 to November 10, 2019. Even if you don’t win, it’s a great excuse to chow down on some Oreos.