Summer may be the best season for ice cream sales but, honestly, there’s never a bad time for ice cream. I personally love propping my butt on the couch and a pint in my lap. But have you sampled this years “trendiest” flavor? Believe it or not, you probably have because, according to Google, strawberry is en vogue this season.

Related story The Food Trends That Will Be Huge in 2022

Google determined the top flavors and types of ice cream based on the topic “Ice Cream in 2019 US.” In order to be considered “trending,” the flavor and/or search term needed to see a substantial traffic increase compared to this time last year.

Other popular flavors include ube — which is a bright purple yam, or sweet potato —  chocolate, mango, matcha and coffee. 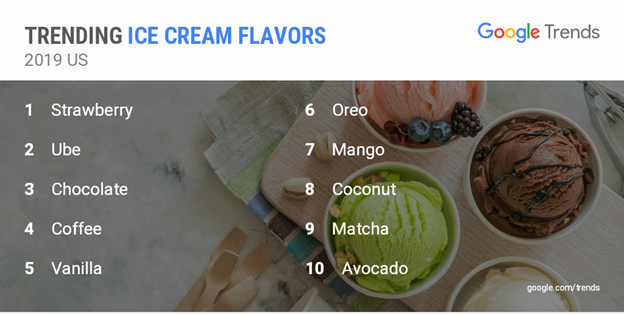 Google isn’t the only company analyzing ice cream trends this season. Grubhub recently pulled together data on ice cream sales and, according to their report, Wisconsinites ordered the most ice cream in 2019 — followed by Massachusetts, Colorado, New York and New Mexico, respectively. They also found most ice cream purchases were made in July.

If You Loved the Best-Selling Disney Parks Cookbook, You Need the Newest Version With Recipes from EPCOT