Sometimes, it seems like “easy” and “healthy” don’t belong in the same dictionary, much less the same sentence. But after a long day at the office, mom and dad don’t always have the energy to spend two hours in the kitchen whipping up something healthy and satisfying (that their kids will actually eat, which we all know is the real battle). That’s where these healthy swaps for easy weeknight meals come in.

Instead of loading up on an arsenal of brand-new recipes that don’t resemble anything your kiddos have seen before, just make one or two simple substitutions (like swapping your regular pizza delivery order with a pie from CAULIPOWER) to cut back on the calories and amp up the nutrients so you can feel good about what you’re serving your fam.

Doctors keep saying it, and it’s time we listen up: Americans eat too much red meat. “Diets must have an appropriate calorie intake and consist of a variety of plant-based foods, low amounts of animal-based foods, unsaturated rather than saturated fats, and few refined grains, highly processed foods, and added sugars,” Dr. Walter Willett, a Harvard University researcher involved in a 2019 report published in British journal The Lancet wrote.

So institute a meatless Monday, where you cook meatless versions of your family favorites, to cut back on the problematic proteins. Try vegetarian chili, a colorful veggie-packed stir-fry or falafel- and veggie-stuffed pitas. The key is to not load up on fat, sugar and processed foods. Instead stick with healthy whole grains like quinoa and whole-wheat bread or pasta.

Making just a few simple swaps can make taco Tuesday as healthy as it is delicious. Skip the shells and pile your taco toppings into a hollowed-out red bell pepper, atop a sweet potato, or use large-leaf lettuce in place or tortillas. Another better-for-you option to traditional tortillas is CAULIPOWER cauliflower tortillas. They taste like the real thing (read: delicious), but are gluten-free and non-GMO.

For another low-maintenance swap, consider turkey meat instead of ground beef or opt for a mix of black beans and mushrooms. You can even serve it with a side salad or cilantro-lime quinoa instead of refried beans or Mexican rice.

Just because you’re trying to eat healthier meals doesn’t mean you have to skip the pizza. Just get the right pizza. Swapping the traditional delivery or frozen pie for one from CAULIPOWER is a simple trick that keeps pizza night healthy. With real cauliflower as the main ingredient and nothing synthetic, it is lower in calories, sugar, fat and sodium than typical pizza crust while maintaining the crispy bite of thin crust.

Gail Becker, Founder and CEO of CAULIPOWER, is a mom of two boys with celiac disease who was in a dinner predicament. When her boys were diagnosed, gluten-free food wasn’t exactly jumping off the grocery store shelves. And even when GF options became more readily available, she noticed they were filled with junk — sugar, fat, calories and more. So she took it upon herself to find a DIY solution.

Becker turned to the internet for recipe inspiration and stumbled across hundreds for cauliflower crust pizza.She made one for her boys and, while her creation tasted fine, it left her kitchen a mess and took 90 minutes she didn’t have as a working mom. Becker went to the grocery store to buy a pre-made version and realized it didn’t exist. “I looked everywhere. I looked online. I looked in stores. I couldn’t find it. I went in. I quit my job, and the next day, I started CAULIPOWER,” she told SHE Media CEO Samantha Skey during her BlogHer Food fireside chat in May.

Now, CAULIPOWER pizzas are available in over 24,000 stores nationwide. Since launching in 2017, CAULIPOWER has become the No. 1 better-for-you pizza in America and the No. 8 best selling frozen pizza in the country. And whipping up this pizza for your family not only means giving them a healthier alternative, but also a quicker one in only 15 mins — sans the kitchen mess.

Thursday Pasta with a Twist

Break out the spiralizer and crank out some vitamin-packed zoodles — aka zucchini noodles — to serve with your favorite marinara sauce. Zoodles don’t have the same texture as your classic al dente pasta, so before you put them in a bowl and pour your favorite sauce over them, heat some olive oil and spices in a pan and then saute your zoodles. This allows them to release some of their moisture and absorb some extra flavor, which will enhance the overall dish.

But you don’t have to stop at zoodles and marinara. They can also make a great noodle replacement in pad Thai or pasta salads for a potluck. When you swap traditional pasta for zoodles, you’re cutting the recipe’s calories by nearly 80 percent while also significantly reducing the number of carbs and upping the meal’s fiber content.

It’s easier than you think to make burgers-and-fries night healthier. Just use a turkey or veggie patty in place of fattier beef and opt for a lower-fat cheese that’s still big on flavor, like cheddar or blue cheese. And to go a step further, use whole-wheat buns or even consider nixing the bread altogether and serve your burger between leaves of crisp iceberg lettuce.

But the real healthier stars of this swap are the fries. Instead of greasy fried spuds, bake up a batch of healthy baked zucchini fries instead. Or if you really want to pair your burgers with potatoes, consider slicing up a russet potato, tossing them in olive oil with salt and paper, and baking them on a sheet. The same baked fry recipe also works with sweet potatoes if you want to keep switching things up. They’ll hit the spot without the guilt. 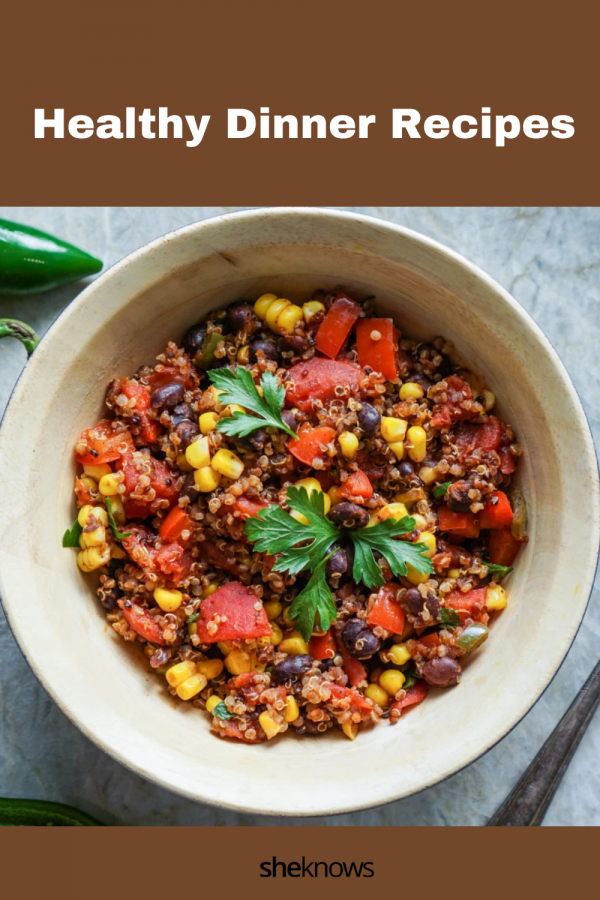